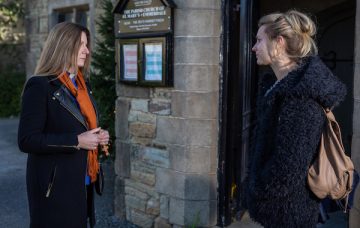 Emmerdale SPOILER: Harriet gets an unwanted blast from the past

Harriet Finch’s past comes back to haunt her next week when it becomes clear she has got a secret connection to dodgy drug addict Dawn.

There have been rumours that vicar Harriet is going to be at the centre of some gripping storylines in the coming weeks as more about her secret past is revealed.

While she might be a woman of the cloth these days, Emmerdale fans have always known Harriet can more than hold her own.

But despite the fact she has been in the Dales since 2013 we still don’t know a huge amount about her life before she arrived.

But that’s all about to change next week when she is clearly spooked after coming face-to-face with drug addict Dawn in the village.

Ross Barton’s friend Dawn comes back to the village after his brother Pete tracks her down while she’s working as a prostitute in an outdoor car park in town.

Feeling sorry for her, Pete offers her somewhere to stay, a promise that he might soon regret when she misinterprets his kindness and tries it on with him.

While Pete backs away, reeling from what happened, Dawn is equally as horrified, but hides her feelings by putting on a front and blackmailing him.

She tells Pete that unless he keeps his promise to give her a roof over her head, she will tell his girlfriend Rhona that it was him who made a move on her.

Thankfully Pete sees through her threats and tells Rhona what happened before Dawn can get to her – but Rhona’s fuming about another woman making a move on her man and she angrily confronts Dawn.

But Dawn gets the upper hand when she shoves Rhona mid argument, causing her to fall to the ground and get a black eye.

The village newcomer is horrified by her actions and flees, but not before Harriet intervenes and tries to help, not realising who she is.

Harriet’s reeling as she comes face-to-face with Dawn – someone who is clearly a huge blast from the vicar’s past. But what secrets do the pair share?

As Dawn fails to hide her surprise at the news Harriet is a vicar now, the pair meet outside the church where Dawn angrily confronts Harriet about their mysterious connection.

Could this be the moment we discover what skeletons Harriet has in her closet?