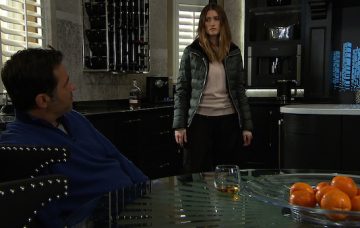 He's teetering on the edge after killing Joe

Emmerdale’s Graham Foster is a man on the edge and when he realises Debbie’s rumbled him, he’s forced to tell her the truth.

The henchman is concerned when Priya hands him Joe’s mobile, and realises Debbie must know he sent the message to her from it.

Read more: Could Debbie kill her dad in Emmerdale?

He pays her a visit at the garage and confesses he was the one who sent the “I’m sorry” text.

Deb angrily lashes out, but fortunately Cain’s there to protect his daughter (and himself) from a potentially dangerous situation. He takes Debbie away from the conversation and calms her down.

But he’s not done with Graham yet. Cain heads over to Home Farm and tells Graham he has to move on.

So Graham does exactly that and decides to cut ties with Debbie once and for all by getting Priya to give her an eviction notice.

A fuming Debbie tells her dad what Graham’s done and Cain is even more angry – this is not what he meant!

When drunk Graham enters the pub later on, Cain grabs him, drags him outside and tells him he has to pull himself together and stop acting so guilty.

But Graham’s a complete mess. What we all know, but Cain doesn’t, is that Graham actually finished the job Cain started and killed Joe himself.

Young Noah is aware something’s going on with Graham, who he’s latched onto following Joe’s disappearance.

Wanting to help, Noah begs Debbie to have a word with Graham and help him come to terms with everything – even though neither of them know exactly what they’re helping him deal with (gosh, this is confusing!).

Desperate for answers herself, Debbie agrees to help her little brother and pays Graham a visit.

He’s disheveled and distressed, but will he open up and tell her what she needs to know? And what will Cain do when he discovers where she’s gone?

To make matters even more complicated, there’s another twist in the tale when Debbie gets out a pregnancy test. Is she carrying Joe’s baby?

And if she is pregnant, how will this make guilty Cain and Graham react? Will it push them over the edge into confessing?

Cain has already confessed to Moira and she’s confronted Graham.

What Moira now knows and Cain doesn’t is that Joe was on his way back for Debbie because he truly loved her. Cain is only keeping himself going because he thinks Joe jilted his daughter and didn’t care about her.

Moira and Graham are keeping the secret, but how long for is anybody’s guess.

Read more: Emmerdale SPOILER: Debbie gets a message from Joe

With Graham falling apart and a possible pregnancy now in the mix, it’s surely only a matter of time before it all comes crashing down.

And how will Debbie react when she finds out the truth? Charley Webb has recently said her alter ego could kill Cain!

But is Joe even really dead? Many fans refuse to believe it. Could that be the biggest twist yet?

Is Graham going to crack? Leave us a message on our Facebook page @EntertainmentDailyFix and let us know what you think.