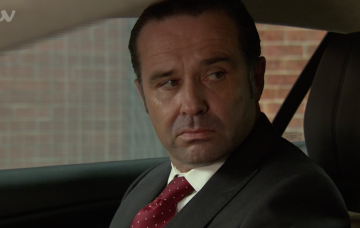 His body count goes up by the month!

Emmerdale viewers know that Graham Foster is more than capable of murder.

Underneath his strong, stoic, silent-type demeanour, he harbours a heart of stone – hardened by the death of his wife and unborn child years ago.

Kim Tate’s henchman, he’s already murdered his surrogate son Joe Tate and drug dealer Connor – and they were both in the same month!

And it’s very possible that Graham has lined up his next target.

While Cain Dingle has left the Dales for a while to “clear his head”, it’s very obvious that Graham would stop at nothing to kill him if he ever came back and discovered the truth about Joe Tate’s death…

In dramatic scenes that aired last week during Kim Tate’s return, Cain threw a punch at Joe as punishment for jilting Debbie at the altar – little realising it was all the doing of hateful Kim and sidekick Graham.

However, Cain hit Joe so hard, he fell to the ground and bashed his handsome little head on a rock – leaving him lifeless.

Viewers know that Cain hadn’t actually killed Joe and that dastardly Graham finished the job off himself by apparently throwing Joe’s twitching body over the Hotton viaduct.

Cain, who has never killed anyone before, has been left in bits by the whole episode, while Graham has taken control of the situation to his advantage.

Graham, in his own way, has also been wracked with fatherly guilt after hearing a voice message from Joe before his death.

Joe told Graham he loved him and considered him family, and wanted to stay in the Dales to “make it work”.

So with Graham carrying all the emotional baggage of his dastardly deed, and Cain the only other person who knows even half of the truth, could Graham add to his toll of murders?

One fan predicted: “Do you think we should be worried about Cain’s future in Emmerdale due to Graham thing?”

I've got to say, Graham intimidating Cain is a more interesting direction for his character than silent robotic butler #Emmerdale

Graham’s got Cain just where he wants him. Haven’t seen him so scared since that Irish gangster was knocking about #Emmerdale

Another added: “I’ve got to say, Graham intimidating Cain is a more interesting direction for his character than silent robotic butler.”

A third is also enjoying the dynamic of the characters, writing: “Graham’s got Cain just where he wants him. Haven’t seen him so scared since that Irish gangster was knocking about.”

Jeff Hordley, who plays Cain, recently told Metro.co.uk: “The great thing about this particular story for me is that, believe it or not, he’s never murdered anybody, so this is totally new ground.

“I think they’re setting up Cain and Graham to circle on another. They’re similar beasts really, so I think that would be a great story.

“But who would come out of that one alive, I don’t know.”