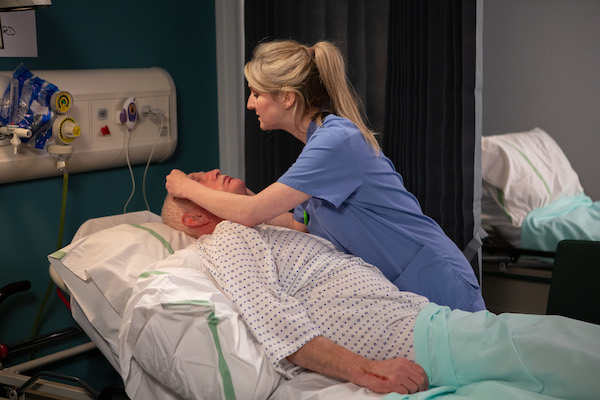 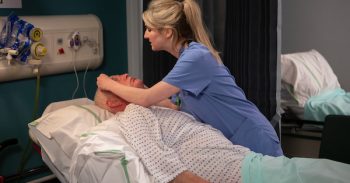 Is this the end for poor Eric?

There’s life-and-death drama heading for Emmerdale next week when Eric Pollard gets hit by a car and is left fighting for his life in hospital.

Eric’s week doesn’t get off to the best start when his romance with Faith hits the rocks and he’s forced to try and put things right before newcomer Bear wins her affections.

Faith moans to Chas and Bear about Pollard’s dismissive behaviour and infatuated Bear is more than happy to offer a shoulder to cry on.

But Pollard is oblivious to Faith’s complaints and it is left up to son David to explain to his dad that he has been ignoring Faith and needs to invest some more time in his relationship.

Pollard realises that he has got some serious making up to do and dashes to the Woolpack to put things right with his other half.

But with thoughts about what he is going to say to Faith going around his mind, distracted Pollard doesn’t see Megan’s speeding car and is knocked out cold when it hits him.

Megan is horrified that she has caused an accident and it soon transpires that she was texting at the wheel of her car.

And Pollard isn’t the only one who has been caught up in the car drama.

Jamie Tate is also back in Emmerdale with a bang as he finds himself involved in the pile up before he’s even stepped foot in the village.

Meanwhile, Pollard is in a bad way and it’s not long before he is being raced to hospital in an ambulance.

But even though he’s been hit by a car all Pollard can think about is the fact he hasn’t had his chance to apologise to Faith.

As Pollard’s being carted off to hospital, little does he know Bear is moving in on Faith and the pair are sharing a sneaky kiss in the pub.

But how will Eric feel when he finds out?

It seems that could soon be the least of Pollard’s problems when he is later in hospital surrounded by his family when he takes a sudden turn for the worst.

Faith, David and Chas are terrified when he suddenly falls unconscious and the nurses start rushing in…

The family are totally helpless as the medical staff fight to save Pollard, but will he manage to pull through, or has Megan’s lack of concentration at the wheel just cost poor Pollard his life?

Do you think Pollard will die? Leave us a comment on our Facebook page @EntertainmentDailyFix and let us know what you think!