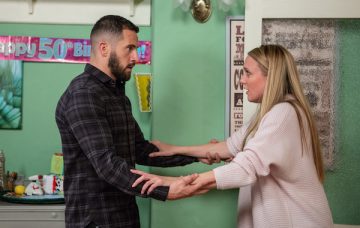 Will Ross and Rebecca leave the village together?

Ross and Rebecca look like they could make a double exit from Emmerdale next week when Ross suggests starting over somewhere new.

It comes after Rebecca gets a birthday card from Lachlan that leaves her frightened.

While Ross tries to convince her that she’s safe now her twisted nephew is in prison, he’s shaken when he hears Bex say that she’d quite happily kill Lachlan if she got the chance.

The newly reunited couple end up having a heart-to-heart and discuss all the terrible things that have happened to them since they’ve moved to the village.

Which is A LOT. They’ve both lost pretty much all their family and are both dealing with lifelong injuries that have changed them as people.

So it’s not exactly a shock when Ross has the brain wave that moving away from Emmerdale might be a good idea.

But will Rebecca go for it? And what would it mean for her baby son Seb?

We definitely think that Ross – who is due to leave any day – could do with a happy ending after his year of misery.

And leaving with Rebecca certainly beats the most popular fan theory that he dies of a drugs overdose.

We don’t think we could cope with that so soon after losing Joe Tate.

Meanwhile, Charley Webb who plays Debbie Dingle in the soap has spoken out about how she’d like the Ross/acid storyline put to bed now.

Debbie Dingle has confessed to police about her involvement in Ross Barton’s acid attack.

And actress Charley, who plays her, thinks the mechanic would struggle behind bars as she’ll find it tough being apart from her kids.

She said: “She’d go to prison for a long time and her kids would be outside so not great, and it would be for something that wasn’t really her fault so it would be a bigger kick in the teeth.

“So she would not cope well.”

Charley hopes her character doesn’t get punished too harshly for the attack – which saw Ross (Michael Parr) mistaken for the intended target, Joe Tate (Ned Porteous) – as she didn’t ask Simon McManus (Liam Ainsworth) to use acid.

She told Metro.co.uk: “That story has been a bit muddled and confused, she never ordered the acid, the acid was just something that that guy did even though she did just want Joe to get beaten up for what he’d done.

Now that Simon has been arrested and Debbie has confessed, Charley hopes the storyline can be “put to bed” for her alter ego.