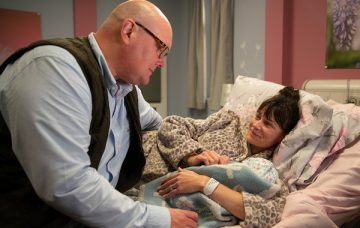 Baby Grace arrives in the world but the birth is bittersweet

Chas Dingle will give birth next week to daughter Grace knowing that the baby won’t survive for long.

Chas and her partner Paddy Kirk have known for months that their baby wouldn’t live much beyond birth following a devastating diagnosis at the 20-week scan.

It was revealed that their daughter had a condition called bilateral renal agenesis, which means her kidneys didn’t properly develop while in the womb.

A distraught Chas was told that the baby had no chance of survival with neither kidney operating and that she would pass away shortly after being born.

Paddy and Chas then made the decision to carry on with the pregnancy and give their unborn child the best life they possibly could under the circumstances.

They also decided to let Grace’s organs be donated in the hope that their loss could help other families.

After Chas gives birth to Grace, her and Paddy share a tender moment with their new daughter.

But their happiness is bittersweet as her birth means they are one step closer to having to say goodbye and the countdown to her death has begun.

How will the couple possibly get through losing their baby in such tragic circumstances?

Do you think Emmerdale were right to cover this storyline? Leave us a comment on our Facebook page @EntertainmentDailyFix and let us know what you think!

Emmerdale airs weeknights at 7pm and 8pm on ITV