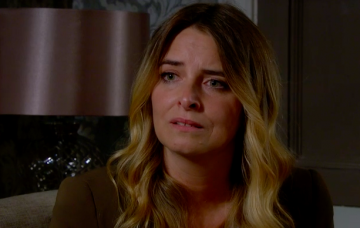 Charity Dingle is devastated after making a big mistake...

Charity Dingle is the first to admit she’s never going to win a Mother Of The Year award.

She’s had more than her fair share of ups and downs… However, she is loyal and would fight to the death for her children and family.

But she’s forced to question herself next week when her negligence puts Moses and Johnny’s lives in danger.

The trouble starts innocently enough when she agrees to look after Moses and Johnny for the day. This should be pretty standard for a mother.

However, she’s horrified when she decorates their faces with permanent paint! Oops.

As she and Marlon try to find a solution, the kids wander off and end up in the Woolpack cellar surrounded by booze!

The young boys then accidentally lock themselves in there – which, luckily for Charity, ends without disaster thanks to Marlon freeing them.

While the mishap doesn’t end in anything too serious, apart from a few red faces (pardon the pun), Charity is left doubting herself.

And when girlfriend Vanessa Woodfield jokes that the incident is “typical Charity”, the pub landlady is crushed.

Is she a bad mother?

Viewers know that Charity is mum to Debbie Dingle, Ryan Stocks, Noah Dingle and Moses Dingle. And some fans would even like to see her have another child with Vanessa!

Even though Van tries to persuade Char that all mums make mistakes, Charity is left sickened with the thought of what could have happened.

After heartfelt talks, Charity raises the question of her and Vanessa living together…

And when Vanessa agrees, the future looks a little bit brighter for the pair!

Do you think Charity is a good mum? Leave us a comment on our Facebook page @EntertainmentDailyFix and let us know what you think!