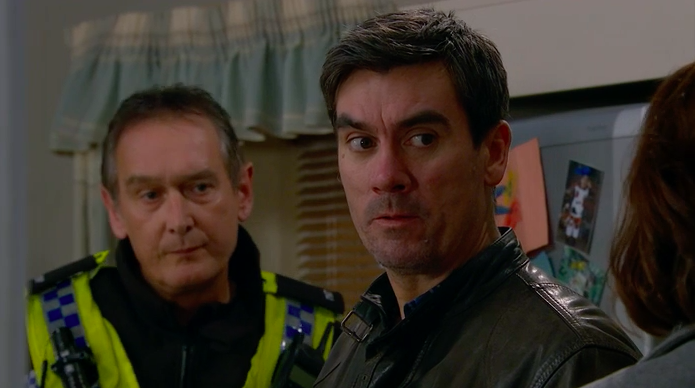 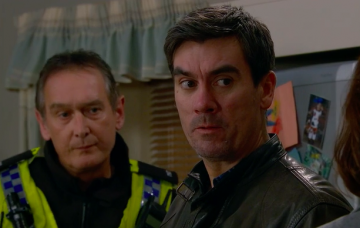 Cain Dingle is left horrified next week on Emmerdale.

The mechanic is going to be arrested again by the police after they discover more evidence linking him to the murder of Joe Tate.

His wife Moira will panic when the police arrive on her doorstep demanding to see Cain.

And when he finally arrives home the large police presence terrifies him.

He demands to know: “What’s going on?”

The detective reveals she has new evidence linking Cain to the murder viewers know he didn’t commit.

She tells him in the spoiler clip on the ITV website: “We’d like you to come down to the station Mr Dingle.

“We have reason to believe your previous statement might not be entirely truthful.

“So would you like to revise your account of your movements on the day Mr Tate went missing?”

Cain refuses and calls the police’s actions ‘blatant harassment’ and tries desperately to work out who has said something to the police.

She replies: “Fine, in that case I’m arresting you.”

Read more: Emmerdale SPOILER: Dawn plays dirty to get her son back

At the station, Cain pales as DS Sanders reveals they have got information that places him at Home Farm on the day that Joe went missing.

Feeling the heat, Cain realises his lies are catching up with him and he is forced to confess that he did see Joe the last day he was seen in Emmerdale.

But as he tries to talk his way out of trouble, will Graham back up his new story? Or is Kim Tate’s lapdog about to land Cain in it big time?

As the police arrive to question Joe’s former right hand man, could Graham frame Cain and let him go down for a crime that he didn’t commit?

How do you think Cain will get out of this? Leave us a comment on our Facebook page @EntertainmentDailyFix and let us know what you think!