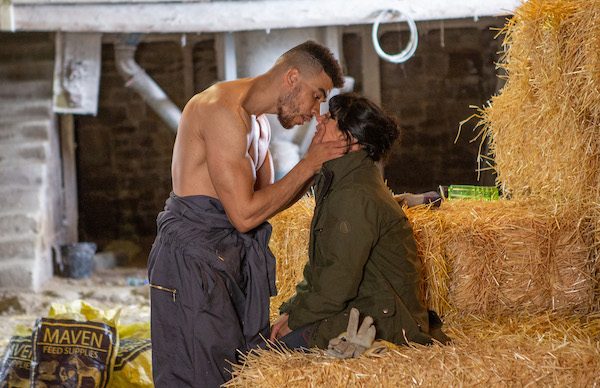 The affair is ON!

After all those lustful looks across the farm, it was only a matter of time before Emmerdale’s Moira Dingle and Nate Robinson’s forbidden romance became official. But what will happen if Cain Dingle catches them together?

Any Emmerdale fan with eyes will have seen that Moira and Nate have got the hots for one another… and after a few near-kisses, it seems the pair finally give in to their feelings next week.

Viewers have seen there’s no love lost between Nate and Cain, with the pair already coming to blows in The Woolpack after Nate landed Cain in the doghouse by revealing he’s sold the garage in Scotland that Lisa Dingle left Debbie and Belle in her will.

But Nate’s determination to get one over on Cain isn’t going anywhere, and next week he continues to tell Amy that she should go for custody of son Kyle who she shares with Mr Dingle.

As Nate encourages his girlfriend to fight for her son, Amy starts to think he might have a point and decides to go ahead with the custody battle.

But little does Amy realise, Nate is just doing it to wind up Cain after seeing yet another tense exchange between Moira and her husband.

Ready to do whatever it takes to get one over on his nemesis, Nate is pleased to see things are far from rosy in the Dingle marriage the following day, while Amy is secretly dreading bringing up the subject of custody of Kyle with Cain.

But Cain and Amy aren’t the only ones Kyle is playing games with… he is also pleased when he gets Moira rattled as they work together at the farm, clearly enjoying the effect he has on her.

As Moira tries to convince Nate – and probably also herself – that she doesn’t have any feelings for him, the tension between the pair is sizzling as they work.

Meanwhile, unsuspecting Cain is in the pub – oblivious to the fact his wife’s head is being turned by the handsome farm hand.

Deciding to make things up to Moira after their fight by going to the farm and lending a hand, Cain sets off home to make amends.

But just as he arrives at the farm, things are hotting up between Nate and Moira, and the pair share a steamy kiss.

Will Cain walk in at the wrong time and catch them together? Or is this a secret affair that is set to sizzle all summer?

Are you loving Moira and Nate? Or do you prefer Moira with Cain? Leave us a comment on our Facebook page @EntertainmentDailyFix and let us know what you think!