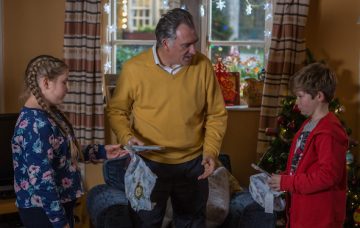 Christmas is far from merry for poor Bob

Bob Hope’s financial woes are worse than ever as Christmas arrives, but will he do the unthinkable and steal from a hospital charity?

With his crippling mounting debts overwhelming him, Bob is feeling far from festive as he dresses up as a Christmas elf in a vain attempt to make some cash.

Emmerdale fans will know that Bob has hit hard times after being dumped by Laurel and being forced to find himself somewhere else to live.

And after losing his half of the cafe to Brenda after he cheated on her for months, Bob’s financial woes have got worse by the week.

Most recently poor Bob has been panicking about how he is going to pay for the expensive Christmas gifts his twins Heath and Cathy have been demanding.

Desperate for cash he even took on a role as a Christmas elf to raise some much-needed funds – but even that hasn’t brought in enough to ease his debts.

Despite working hard, poor Bob can’t seem to get a break and, with the pressure of owing cash all over the place, he even considers stealing from the hospital charity he is working for as a Christmas elf.

But will he really go through with robbing from sick kids?

Desperate and out of options, Bob decides to pawn his new watch, thinking that it should just about give him enough money to buy his kids the presents they’re asking for.

But when Christmas Day arrives, he hits another downer when his gifts fail to impress his high maintenance children because he’s bought the wrong thing.

With his kids in a huff and his financial woes mounting, can Bob get himself out of his grim situation?

It’s going to take one hell of a Christmas miracle!

Emmerdale will air these scenes on Monday 24th and Tuesday 25th December on ITV.

Do you think Bob deserves a break? Leave us a comment on our Facebook page @EntertainmentDailyFix and let us know what you think!