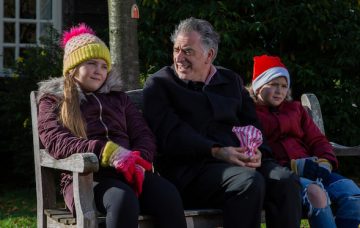 Will he be spending Christmas out in the cold?

Poor Bob Hope’s crippling money worries are set to get even worse next week as his kids demand expensive Christmas presents… could he be facing a lonely Christmas sleeping rough?

Emmerdale fans have seen Bob’s life spiral out of control over recent months, starting with him getting dumped by lover Laurel Thomas last month.

But the Woolpack barman’s woes got even worse when he then spent an evening growing closer to estranged wife Brenda Walker, giving him hope that there could be a reunion on the cards.

But of course Brenda is a woman scorned, and she quickly turned down Bob’s attempts of a kiss, leaving him alone once again.

And while Bob’s love life has gone down the pan, so have his living arrangements. He has been living in the B&B since Laurel threw him out in November… but regular viewers will have seen he is struggling to pay his bills.

With his debts now weeks old, Bob is desperate for cash to pay for his room. But could he find himself homeless if he doesn’t get his hands on some money, and fast?

Next week sees Bob’s twins, Cathy and Heathcliffe, demanding expensive presents for Christmas and Bob being the man that he is, he struggles to say no.

Seeing the pickle that he is in, Harriet kindly offers Bob a job as a Christmas elf to help ease his money worries, a job that Bob accepts, knowing that he can’t afford to turn work down, even if it does involve festive fancy dress!

But if being dressed up as one of Santa’s little helpers isn’t bad enough, Bob’s world is turned upside down once again when he’s hit with a further revelation…

What could happen to make things even worse for Bob? Is he about to find himself homeless for Christmas?

Do you think Bob deserves some happiness for Christmas? Leave us a comment on our Facebook page @EntertainmentDailyFix and let us know what you think!