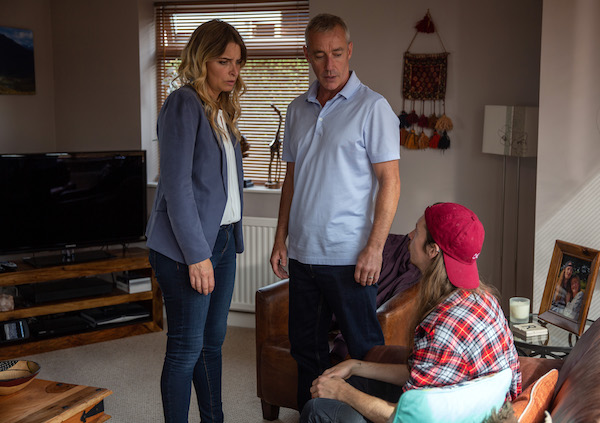 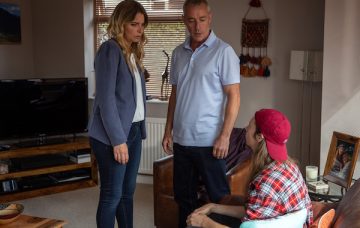 Irene calls her with some shocking news

Charity is left reeling next week when a frantic call from Irene reveals DI Bails has visited her son Ryan. But what does the corrupt copper want?

As the week gets underway, Ryan is feeling pretty chuffed when Charity introduces him to her son Moses, who is Ryan’s half-brother.

But later she confesses to Vanessa that she still has reservations about introducing him to the rest of the family.

She clearly has a change of heart though as later in the week she texts Ryan to tell him she’s ready to tell the Dingles about him.

She then sets about getting a special dinner ready to introduce Ryan to the family.

But her plans are thrown into chaos when she gets a call from Irene – Ryan’s adopted mum – which causes her to dash out of the house.

Vanessa follows her, concerned, and when they get to Irene’s they’re shocked to see evil DI Bails talking to Ryan.

Charity struggles to hide her emotions as she confronts her rapist, who insists that he just wants to talk to their son.

But Charity doesn’t trust him one little bit. What does he really want? And is he planning on corrupting the court case?

Charity revealed earlier this year that when she was a teenager, she was held captive by Bails after he found her on the streets working as a prostitute.

She thought she could trust him as he was a police officer, but he locked her in his flat and repeatedly raped and beat her.

He even let his friends abuse her and she fell pregnant aged just 14.

She eventually managed to escape and fled to hospital where she gave birth to a baby son who she believed to have died shortly after he was born.

Charity was stunned when Harriet and Vanessa discovered that her baby hadn’t died at all, and had been adopted by the midwife who delivered him.

She tentatively met up with her son, Ryan, and the pair have been carefully building a bond ever since.

But will Bails’ arrival in Ryan’s life lead to more misery for Charity if he tries to twist her version of events to their son?

What do you think Bails is up to? Leave us a comment on our Facebook page @EntertainmentDailyFix and let us know what you think!