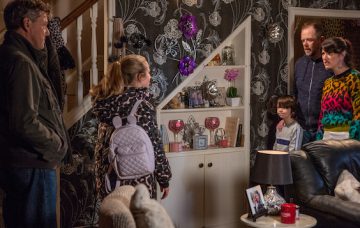 Will Kerry and Dan let Amelia leave the village?

Kerry Wyatt’s plan to get rid of Daz Spencer totally backfires next week when Amelia Spencer decides she wants to leave the village with him.

Fed up of covering for Daz since the hit and run that almost killed Graham Foster, Kerry tells him that if he doesn’t leave the village then she will go to the police and tell them everything.

She’s thrilled when Daz reveals he has got a new job in Croydon, but despite being desperate to get rid of him, Kerry and Dan worry about how Amelia might take the news that her biological dad is leaving town.

But when Amelia confronts Daz and asks him why he is leaving, he tells her about Kerry’s threats, leaving Amelia fuming.

Confronting Kerry, Amelia isn’t happy about what has happened and leaves both Dan and Kerry stunned when she announces that if Daz is leaving, then so is she.

Kerry is totally against the idea of Amelia going anywhere with Daz, but surprisingly Dan seems more open to the idea and agrees for her to move to Croydon.

Kerry can’t believe what she is hearing, but as she has it out with Dan, it soon becomes clear that he has got a plan up his sleeve.

Despite Kerry thinking that Dan isn’t supporting her, he is actually doing the total opposite and is using reverse psychology in an attempt to make Amelia stay in Emmerdale.

It turns out that Dan is as against Amelia leaving as Kerry is, but he’s just not letting her know that!

They might be on the same side when it comes to what they think is best for Amelia, but the cracks start to show in Dan and Kerry’s relationship next week, all thanks to this drama from Daz.

When an upset Kerry sees that Dan’s plan hasn’t worked and Amelia is still planing to move away, she leaves Dan concerned when she compares Amelia leaving to losing her own daughter, Amy.

Can the troubled pair make it though this rough patch?

And will Amelia leave the village with Daz, or can Kerry and Dan convince her to stay put before it is too late?

Do you think Amelia will leave with Daz? Leave us a comment on our Facebook page @EntertainmentDailyFix and let us know what you think!