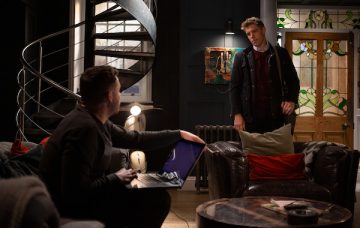 Things are about to get very messy indeed

Aaron and Robert recently agreed to put their plans to have a baby on hold after their finances meant they couldn’t afford to go ahead with the surrogacy.

But after a chat with his mum, it seems Aaron might be having second thoughts.

Next week sees Aaron going along to a surrogacy meeting alone when Robert fails to show up thanks to a work commitment.

But while Robert is meeting a potential new client, Aaron is getting caught up in baby plans and heads home excited about their future with a family.

Getting caught up in everything, it starts to look like Aaron might be galloping ahead with the plans without Robert’s full consent.

Could this start to come between them?

The following day Robert has another work meeting, oblivious to that fact that while he is busy, Aaron is actually seeing a potential surrogate called Lucie.

From the moment that Aaron meets Lucie he warms to her, and realises that she could be the perfect person to help him and Robert have a baby.

But when he hears Lucie is also meeting other potential couples who are looking for a surrogate, he starts to panic and is determined to secure her for himself.

At home Aaron finds a happy Robert, who has had a good day at work after not only securing a new client but also getting them to put down a cash deposit.

But while Aaron is clearly pleased for his husband, he fails to mention Lucie, leaving Liv worried.

Liv agrees to keep her brother’s secret for now, but why is Aaron not telling Robert about the surrogate?

Desperate to make sure Lucie is their surrogate, Aaron realises the cash that Robert got from his new client could be just what they need to get her on side.

Is he about to do something he will definitely regret?

Do you think Aaron’s secret will end in disaster? Leave us a comment on our Facebook page @EntertainmentDailyFix and let us know what you think!