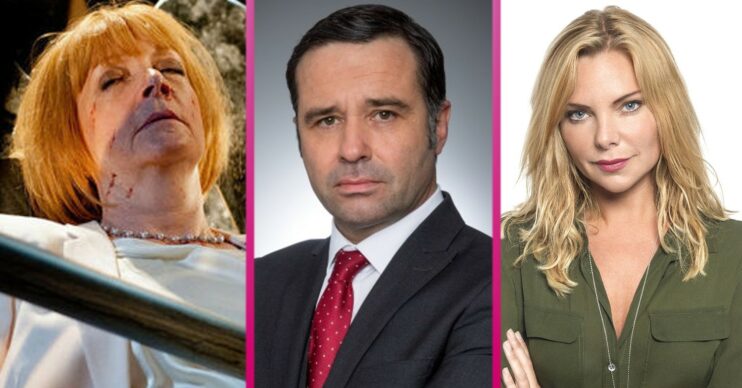 Emmerdale’s Pierce to EastEnders Ronnie: 5 soap deaths that made no sense

These deaths made absolutely no sense

In soapland – especially Emmerdale, Coronation Street and EastEnders – there are no guarantees.

Characters are killed off in major and minor plots all year long – and most of the time they make sense.

But here are five that have never made sense – and will never make sense.

It’s one thing to die in a huge soap stunt – but it’s quite another to die in a stunt away from the main stunt.

And when that stunt involves a dangling mirror and a final speech – well that’s too much.

Val was an Emmerdale icon – and a character who should have survived and fled the village for a life cruising the high seas.

Instead she was chopped in half by a mirror in the hall of mirrors and died talking to herself.

Bosses knew it was a mistake and they brought her back as a ghost a few years later but it doesn’t make it better.

After hiding herself for years, Rana finally found her happy ending with Kate Connor – and they were ready for their perfect wedding.

Until Gary Windass collapsed a roof on her head and left her to die.

Years later and Gary still hasn’t been exposed and poor old Rana has been forgotten.

He might have been a rapist, a murderer, an abuser and an all-round evil villain – but he was a watchable one.

As evil as Pierce was – he was a chilling reminder of just how evil men can be.

So when he was brought back to kill Graham it was a dodgy decision, but believable.

So that’s why killing him off off-screen was a huge mistake. Surely there are other ways to introduce his son?

As if there could be a list of soap deaths that make no sense without the ultimate two – Ronnie and Roxy Mitchell.

Never before has a soap shot itself in the foot with a death before – and bonus it was two!

The sisters should never have been killed off.

Not only did the decision make no sense, it marked the beginning of the end of EastEnders as viewers knew it.

After all why should viewers get attached to characters who can be killed off on the whims of a failing producer?

At times Emmerdale really does feel like it wants viewers to turn on it.

It killed off Joe Tate (then reversed course) and then not learning from that horror it killed off Graham Foster.

In three short years he had become a fan favourite and the decision to kill him off in a huge whodunnit fell flat.

Fans were outraged – and even more so when Pierce Harris returned to do the deed.