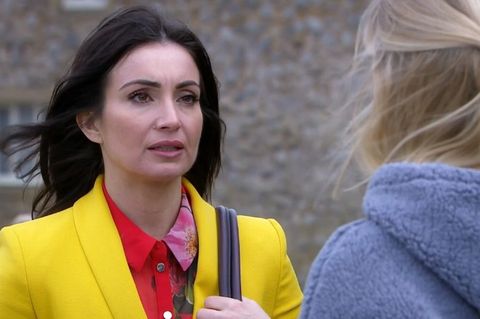 It was the slap heard all over the dales

Emmerdale fans are in shock after Leyla slapped Leanna.

Wedding planner Leyla’s business was trashed and after months of sniping and backbiting she was convinced her boyfriend’s daughter Leanna was responsible.

Confronting the troublesome teen she said: “Give me one good reason why I shouldn’t call the police you vindictive cow?

“Don’t play the innocent with me, you’ve trashed my business and cost me a small fortune. I am done being nice. I’ve tried with you, I really have but you are a little sociopath. I’m not scared of you, you’re a child.”

Scheming Leanna insisted she hadn’t done anything and threw as much venom at Leyla as she could muster.

She said: “And the only thing you know about children is how to abandon them. What was it – oh yeah you got pregnant with your sister’s fella. Classy.

“I know everything about you Leyla, but I didn’t know how desperate my dad was but he must have been to get with some ancient, dried up old skank who’s had her bargain bin nails into every man in this village and yet still ended up a pathetic, single, old slapper.”

With that Leyla laid the teenager out with a slap and left her reeling, but Leanna soon recovered to use it to her own advantage.

Manipulative Leanna said: “When my dad finds out about this you are so finished.”

Viewers divided over the slap

Fans are split – with some cheering the slap and others criticising it.

One said: “Well deserved, that’s what that spoilt lil [expletive] is short of.

“Who the hell does Leanna think she is?!?! She may not have trashed the place, but I wouldn’t be surprised if was her. Her attitude stinks!!! She just doesn’t like her dad giving anyone else attention, she wants it all the time.

“She needs to start growing up, and stop acting like an immature, spoilt lil daddies girl, who is just too used to the ‘what Leanna wants, Leanna gets’ crap.

“Her dad has a right to a life of his own, he does not need her permission. Plus Liam needs to grow a pair and put his foot down.”

A second said: “Good on her for smacking the selfish, manipulative sprog! Deserved it and more.”

A third said: “That slap was a long time coming.”

However other fans are less impressed with Leyla’s action assaulting a teenager.

One said: “Maybe next time Leyla should get some actual proof about just who exactly trashed her business BEFORE she goes on the defence attacking teenagers in public on the street.”

A third said: “Leyla’s going to regret that slap when Leanna tells her dad!”