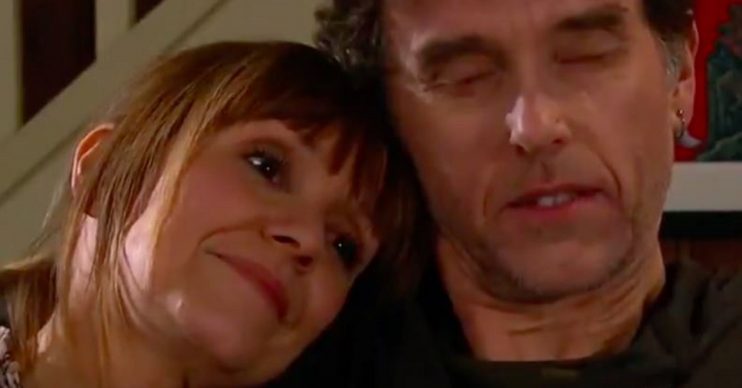 Are they going to get back together?

Fans of Emmerdale are in shock after Rhona kissed ex Marlon Dingle.

The vet shared a tender moment with her depressed friend in last night’s (Friday, March 20) episode, when their friendly conversation turned into something more and she leaned in to kiss him – only to be rejected.

Trying to cheer him up, she told him: “Marlon, you have to believe that there are better times ahead because if there aren’t, the abiding memory of my life will be Graham being murdered by the man who raped me.”

“Sorry, I’m supposed to be cheering you up,” she added.

Rhona replied: “No, we’re not broken. It’s just there’s no quick fix. I think that’s what people find really hard to understand, and they want the sun to come out tomorrow. They mean well, they just don’t get it.

“I do,” Marlon replied and it didn’t take much for Rhona to lean in for a kiss – that Marlon quickly rejected.

Utterly mortified, Rhona rushed out of the house but after everything she has been through recently, that was understandable. However, fans were in shock at the scene.

One said: “Marlon has just gotten out of prison. He doesn’t need Rhona bossing him around, does he?!”

A second said: “Marlon is in no fit state for a relationship or anything like that and Rhona took advantage of his vulnerability.”

A third said: “So Rhona is a loose end, no real storylines, same for Marlon let’s put them together… another forced relationship to clean up bad writing. #Emmerdale.”

Others thought it could lead to a reunion for the former couple and they were crossing their fingers hoping for it.

One said: “They will become a couple coz they have disaster relationships but trust each other.”

I think them being back together would be a great idea. They seem happy as friends, but I’d like the show to explore the romantic side of their relationship.💜

A second said: “I think them being back together would be a great idea. They seem happy as friends, but I’d like the show to explore the romantic side of their relationship.”

A third said: “I’d love them to get back together, I love Emmerdale always will. I think people should not make negative comments, if you can’t say anything nice don’t say anything. Emmerdale are trying their best, be kind especially with all that’s happening.”

Do you want them back together? Leave us a comment on our Facebook page @EntertainmentDailyFix and let us know what you think!