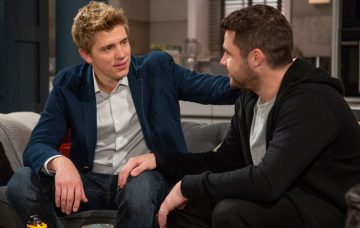 Trouble is brewing for Aaron and Robert

Robron could be in trouble if an Emmerdale fan theory is going to come true.

Viewers have seen Aaron Dingle left devastated by one of his prison tormenters arriving in the village as his step-cousin Billy Fletcher.

Things have already escalated into violence but Billy insists he has changed and fans think they have worked out why.

They have picked up on Billy’s reluctance to be set up with any women in the village, and his prison ordeal and think they know what he is hiding.

A theory posted online says Billy will turn out to be secretly gay and only stood by as Aaron was attacked in prison out of fear of it happening to him too.

And they think Aaron will come to understand and forgive Billy.

Then the pair will embark on a steamy affair that threatens Aaron’s marriage to Robert Sugden.

One fan wrote on DS Forums: “I have a feeling that it’s going to turn out Billy is gay.

“The fact that a lot of the women have made a comment already about how handsome he is and him saying to his Mum that Priya isn’t his type and her responding with another ‘must be hard to be such a lady magnet’ comment.”

They added: “Not only that but he took part in the homophobic bullying of Aaron in prison and it’s not unheard of for a closeted person to lash out at someone who is gay (like Aaron did himself once).”

Another fan agreed with the theory and took it further, predicting Billy will have an affair with Aaron.

They wrote: “And he will no doubt have an affair with Aaron if he does turn out to be gay.”

A third said: “Yeah, I think Aaron and Billy will probably end up fighting but the anger turns to lust. etc.”

Can’t Robron just be happy for once?

What do you think of the idea Billy and Aaron will have an affair? Leave us a comment on our Facebook page @EntertainmentDailyFix and let us know what you think!