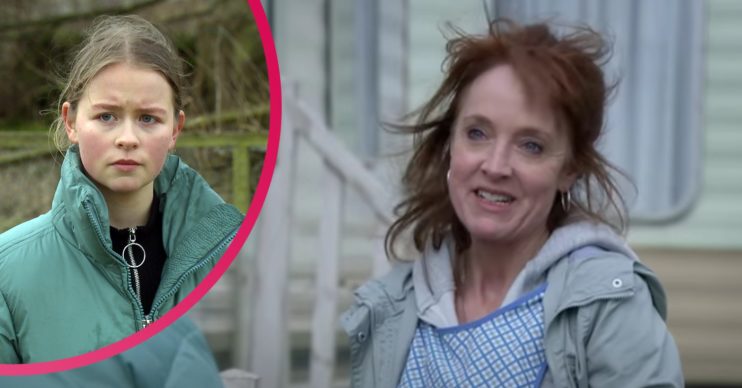 Emmerdale: Sandra Flaherty has had a ‘personality transplant’ fans claim

Emmerdale fans are claiming that Liv’s mum, Sandra Flaherty, has had a “personality transplant.”

Over the last few weeks, Liv has started drinking again as she struggled to deal with the guilt of Paul’s death.

In last night’s episode of the ITV soap (Monday, May 25) Liv tracked down her mum Sandra to a caravan site.

Meanwhile, Aaron, Ben and Chas desperately tried to find Liv down. They discovered she booked a light to Dublin, where she believed Sandra was living with her sister Bridget.

Chas spoke to Bridget and learnt that she had kicked Sandra out a few months back as her drinking got out of control.

They were unable to find out if Liv got on the flight and with Bridget telling them Liv hadn’t turned up, Aaron worried that something bad may have happened to his sister.

However Liv managed to find her mum at a caravan site, but immediately Sandra was shocked to see her daughter.

Has Liv’s mother Sandra had a personality transplant?

Liv was appalled to find out that her mother had been back in the UK for months but hadn’t been in contact.

Emmerdale: Sandra has had a ‘personality transplant’ fans claim

Later Liv told her mum that she was having a hard time and needed her.

When Liv begged her mum to listen to her, Sandra said: “Well go on then. What’s it now? You’ve failed you A-levels, or wherever you are in your schooling, I’ve lost track.

“Or Aaron’s run off after some fella again, forgotten you exist.”

Liv tried to explain what happened with Paul to her mum, but she brushed it off.

However fans were confused, saying they don’t remember Sandra being so disinterested in Liv before.

They’ve made Sandra’s character totally unrecognisable. Ok she was flakey but she really cared about Liv and wanted to do right by her. Now she’s a total waster, doesn’t give a toss about Liv and doesn’t even look/sound like she did even though it’s the same actress #emmerdale

Wonder why #Emmerdale has completely changed the personality of Liv's Mum, Sandra. I guess belatedly going for a chaotic vibe will make it easier for viewers to blame her for Liv's relationship with alcohol.

Am a bit confused here, as I don't remember Sandra being a drunken dead beat #emmerdale

However it is worth noting that Sandra has been off-screen for five years.

When did Sandra last appear?

Sandra, who is currently played by Joanne Mitchell, last appeared in Emmerdale back in 2016 when Aaron tracked her down as he needed her help to convict his dad Gordon of child abuse.

Aaron had been sexually abused by Gordon when he was a child.

Sandra later confessed to Chas that she suspected Aaron had been abused. Gordon was sent to prison, but later took his life.

In April 2016, Sandra made the decision to move to Dublin. But Liv decided to live with Aaron in Emmerdale.

Previously Sandra appeared in 2006 played by actress Christine Brennan and in 2008, played by Janet Bamford.

Want more from Emmerdale? Entertainment Daily has a dedicated Emmerdale spoilers section for you to get your fix before the latest episodes air.