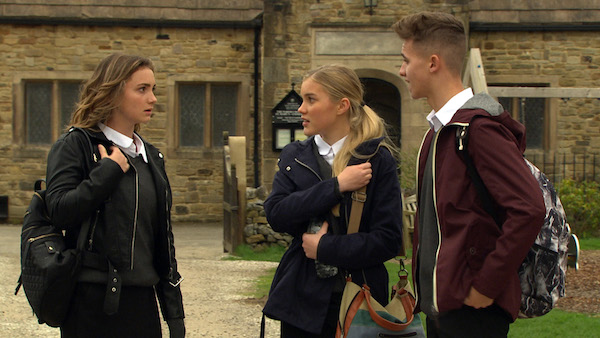 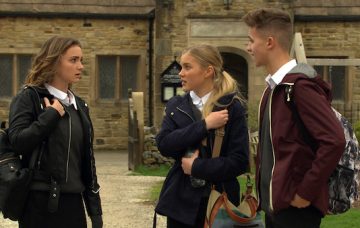 The hairdresser became jealous after seeing Priya flirt with her boyfriend Liam Cavanagh and has been worrying about her age, with her 50th birthday.

When her Botox kit arrived in the mail, her friend Kerry snooped through her package and discovered what she had ordered.

As the pair chased each other round the salon, the kit slid across the floor to Liam’s daughter’s feet.

Amused by what Bernice had ordered, Leanna encouraged Bernice her use the kit.

However, after a couple of injections Leanna pointed out Bernice’s face was going red.

As Bernice collapsed to the floor complaining her heart was beating fast and she was struggling to breath, Kerry yelled at her to call an ambulance.

When they got the hospital it was clear Leanna was very distressed and we later found out why.

When her dad showed up he revealed to Kerry that his first wife, Leanna’s mother, died suffering from an allergic reaction.

He also revealed Leanna was in the room and witnessed her mother’s death, leaving her traumatised.

This is the first bit of information viewers have been given about Leanna’s mother.

After suffering from the allergic reaction Bernice could be left with permanent facial paralysis.

“Leanna is, without question, very troubled. But through the Botox story it comes to light that the reason Leanna is so troubled is that Dr Cavanagh’s first wife – and her mum – died of anaphylactic shock.

“So this this will bring back stuff for Leanna as well. You discover more about Leanna and why she behaves the way she does. She’s not just pure evil. Although some of the stuff she does is pretty bad!”

Did you watch last night’s Emmerdale? Leave us a comment on our Facebook page @EntertainmentDailyFix and let us know what you thought.