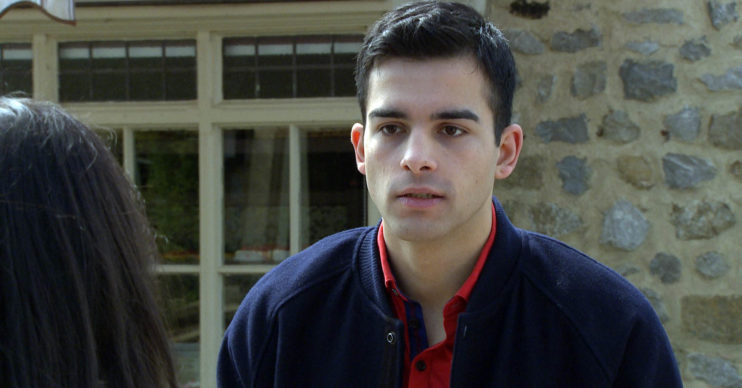 Adam Fielding left the soap in 2016

Emmerdale could be planning a return for Kirin Kotecha to tear Charity Dingle and Vanessa Woodfield apart.

Kirin, who fled Emmerdale in 2016 to escape punishment for a fatal hit and run, is the father of Vanessa’s young son, Johnny.

Although he couldn’t cope with parenthood at the young age of 19, he may have matured enough by now to want contact with his little boy – or worse for Vanessa, custody of him.

Read more: Soap fans all saying the same thing as Corrie, Emmerdale, EastEnders and Hollyoaks ‘given green light to return’

Vanessa is currently battling bowel cancer and as she faces up to her own mortality is trying to put plans in place for Johnny should she die.

After Vanessa’s fiancée Charity hesitated when asked to care for Johnny in the event of V not being around any more, Vanessa decided to ask best friend Rhona instead.

Rhona agreed and the paperwork has begun, but the situation has driven a wedge between Charity and Vanessa.

The couple eventually talk things through and make up, and they decide Charity should adopt Johnny.

As Johnny has a biological father out there, Kirin’s approval is needed for the adoption to go ahead.

Next week, Charity gets the ball rolling and in typical Charity fashion, gets backs up from the start.

She marches into the offices at HOP to confront Priya, who was married to Kirin’s father, Rakesh. Charity demands to know where Rakesh and Kirin are.

But Priya has no idea where they are, insisting she hasn’t heard from them in a long time. But is she telling the truth?

Frustrated Charity lies to Vanessa that everything’s fine and non-the-wiser V thinks they’re on track to sort the adoption out.

However, Charity soon tells Rhona the truth: they need Kirin to agree to the adoption and no one knows where he is.

Knowing this isn’t going to be easy, could Charity head off on a road that will open up a whole new can of worms?

Kirin to return and cause trouble?

If Kirin is located, his return could spark all sorts of problems for Charity and Vanessa.

Although Vanessa is fully committed to her other half, what if his interference and demands to see his son drive a wedge between her and Charity?

Could he see that Vanessa is sick and use it against her to gain custody of the little boy himself?

Will Charity be forced to go to desperate lengths to protect her family from him? When it comes to family, no one messes with the Dingles…

How could Kirin return to Emmerdale?

Read more: Emmerdale reunion for Cain and Moira after they share a moment

Kirin is currently on the run after being overwhelmed by parenthood and drinking too much, causing a fatal crash that killed Tess Harris.

He is believed to be in South America in order to evade the long arm of the law.

However, despite the fact he is wanted by police, there are all sorts of ways Emmerdale could explain his return.

Kirin’s clever father Rakesh was a lawyer (who also fled after his attempts at blackmail went wrong), so he could easily have pinned the crime on someone else by now – perhaps Tess’s evil ex-husband Pierce Harris, who is already serving a life sentence – paving the way for Kirin to come back.

A return could be explosive – but what would it mean for Charity and Vanessa in the long run?

Do you want Kirin to return? Leave us a comment on our Facebook page @EntertainmentDailyFix and let us know what you think of this story.