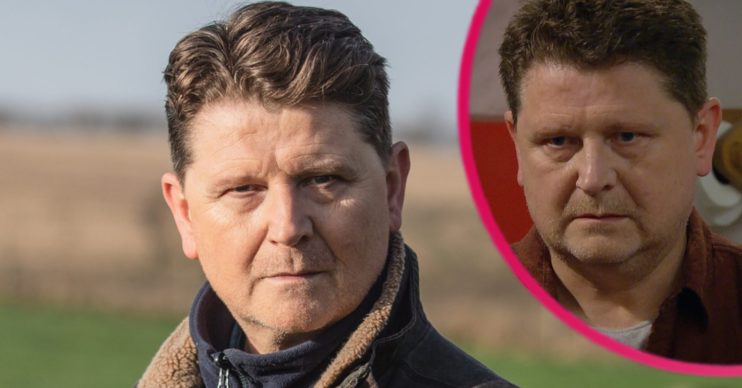 Reece has played Paul for the last year

In last night’s scenes (Thursday, April 1) Emmerdale fans were glued to their screens as they watched the spectacular stunt scene.

Jimmy ended up crashing his truck into Mandy and Paul’s wedding barn, where Liv was confronting Paul.

Paul, Liv, Jimmy were rushed into hospital. However it was Paul who ended up losing his life.

But actor Reece Dinsdale recently explained that he struggles to watch himself on-screen due to his body dysmorphia.

Speaking to the Mirror, the actor said: “In my life I have never been comfortable after things that were said when I was young.

“I would always look at myself as twice the size I am. It has been the bane of my life. But I work with that.

I would always look at myself as twice the size I am.

Reece announces he will continue to work at Emmerdale

Emmerdale isn’t the first soap Reece has been in. Between 2008 and 2010 he played Joe McIntyre in Coronation Street.

He also starred in 80s sitcom Home to Roost alongside John Thaw.

Although Reece’s Emmerdale alter ego Paul has died, Reece is not actually leaving the soap.

He said: “I was actually directing on Emmerdale when I was asked, right out of the blue, if I would like to play Paul.

“I’m delighted to announce, therefore, that I shall begin directing once again on the show in a couple of weeks time. I’m the cat that got the cream.”