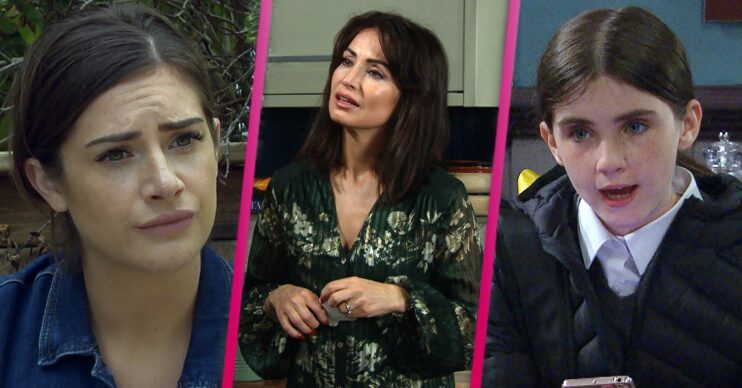 Emmerdale RECAP – this week in review: A thrilling siege but Leyla’s quiet pain stole the show

A review of this week's Emmerdale

It was busy and emotional this week in Emmerdale – if you didn’t manage to catch all of it, here’s a recap.

Earlier this week, Russ managed to manipulate Victoria into feeling bad for him about his financial situation.

Wendy managed to convince Victoria to lend Russ the £50k Harry had been left by Russ’s mother.

However Wendy began to feel guilty and went to The Hide to stop Victoria transferring the money.

She explained that Russ had been blackmailing her with a big secret – she never qualified as a nurse.

Raging Russ then turned up and pulled out a gun, demanding Vic send the money over.

Later Russ discovered that David was in the Hide offices and took him hostage too.

When Victoria tried to get the gun off Russ, a struggle ensued. David came to try and help and a gunshot went off.

In Friday night’s episode (September 10) it was revealed that David had been on the receiving end of the shot.

After Vic knocked Russ out, they managed to get the police inside.

David was rushed to hospital. Wendy seemed hopeful he would be okay, but will he pull through?

Personally I loved the siege scenes this week. I know some viewers aren’t keen on the violence, however these scenes were thrilling.

It’s been a while since they’ve had a siege in the village. Russ proved to be just as terrifying as Wendy had described in the past.

It will be interesting to see what happens next.

What will happen to Russ? Will Wendy get into trouble now the secret it out she’s not a qualified nurse?

This week pregnant Leyla went to the surgery as she had been bleeding.

She was forced to come clean to Liam –  who is still grieving daughter Leanna – that she’s pregnant, but feared she lost the baby.

Leyla was adamant about going to the hospital alone, but Liam realised he needed to be with her.

It was heartbreaking to see Leyla try so hard to cover her pain to put Liam first – if that’s not real love I don’t know what is.

She had explained to Priya she would love to be a mum again, so to see her go through losing her baby, when she too is grieving for Leanna, was very upsetting.

I hope we get to see some happiness in the near future for Liam and Leyla.

Earlier this week, April figured out she must know the person who has been anonymously bullying her, as they posted her phone number online.

April returned home early from school this week, throwing up she was so anxious.

The 12-year-old refused to tell her dad the bullying had started up gain.

Meanwhile April’s ‘friend’ and aunt Cathy confessed to her twin brother, Heath, she was the one who started the trolling.

It’s good to see Emmerdale tackling a bullying storyline. It’s also good to see more of Cathy and Heath, who we hadn’t really go to know properly before.

Anyone who has been through bullying will know the anxiety it gives. To see young April so scared to be at school and come home being sick brought me to tears.

No one should have to go through that worry. It’s very clear Cathy is jealous of her younger niece, but I am struggling to feel any sympathy for her whatsoever.

Another thing I wanted to add was how did Marlon not piece together that April was being bullied again? Surely the thought must have popped into his head?

But I hope this teaches parents to check through their children’s devices, especially if they’re only 12!

However I do have to give praise to the young cast of Emmerdale. They’re an extremely talented bunch and I can’t wait to see how the rest of this plot unfolds.

What did you think of Emmerdale this weeek? Leave us a comment on our Facebook page @EntertainmentDailyFix and let us know what you think!