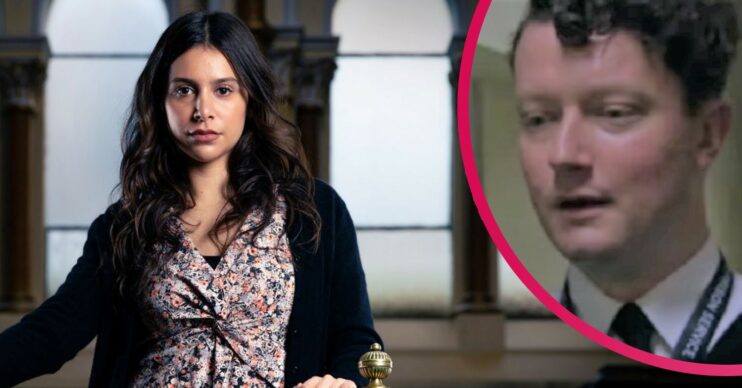 Emmerdale: Prison Officer Ian is up to something, say fans

Emmerdale fans are convinced that prison officer Ian is actually an undercover police officer trying to get more information out of Meena.

Prison Officer Ian has been looking after Meena while she’s in prison, but Emmerdale fans are convinced that there’s something more to him.

She soon began to work her charm on him. In last week’s scenes he sneaked a chocolate bar into her prison cell and later smuggled in a newspaper with her on the front page.

In last night’s episode (Monday, April 11 2022) Meena flirted with Ian as she asked him what hairstyle she should go with for court.

As he prepared to take her out of her cell for court, she told him there was no one she’d rather share her handcuffs with.

However fans don’t think Ian is really falling for Meena’s manipulation. They’re convinced he is actually an undercover police officer trying to get more information out of Meena.

Does anyone else think "Ian" is a undercover copper.getting info on meena #emmerdale

Now I've been thinking…Ian the 'prison officer' who is actually a police officer, who'll be called as a last minute character witness to wipe the smug smile off Meena's face, once & for all. The villagers need justice #Emmerdale

Prison guard, Ian. Is he playing Meena?
Seems very gullible. No prison guard would get a job being that gullible! #emmerdale

Other fans have a theory that Ian will help Meena escape prison.

What’s next for Meena and Ian?

In tonight’s episode, Manpreet dreads the day ahead of her. But she’s determined to destroy her sister in court.

Meanwhile in prison, prison officer Ian is conflicted when he goes against is better instincts and flirts with Meena.

Once in court, Manpreet refuses to let Meena’s performance rattle her as she takes the stand to testify against her killer sister.

It’s tough for Manpreet as the defence delves deep into her past and attempts to portray her as a liar.

Manpreet is infuriated to see her sister enjoying every moment. But will things go Meena’s way?

Will you be watching this week;s Emmerdale? Leave us a comment on our Facebook page @EntertainmentDailyFix and let us know what you think!