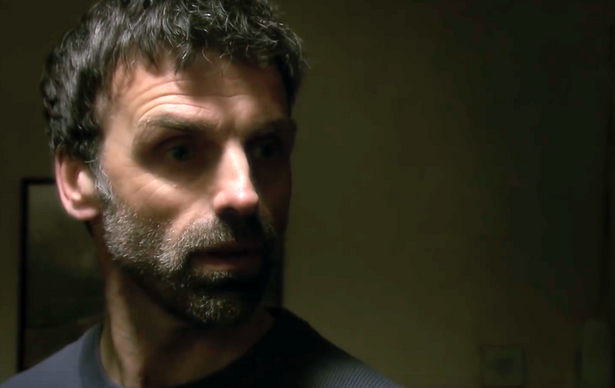 Viewers of Emmerdale are fearful that “history is about to repeat itself” between rapist Pierce Harris and his victim Rhona Goskirk.

Poor Rhona has no idea that her ex-husband and stalker Pierce, who went to jail for raping her on their wedding night, has already returned to the village and murdered her partner Graham Foster.

But, on Thursday night’s double bill (January 30), the vet got dangerously close to the truth when she found a clue amongst Graham’s belongings.

In the first half of the episode, we saw Pierce ordering flowers online to send to Rhona with the message: “Our destiny is near.”

In a later scene, Rhona found a scrap of bloodied paper amongst Graham’s possession with an address written on it.

Why do I feel like history will repeat itself?

Determined to get to the truth of Graham’s murder, Rhona decided to investigate – totally unaware that her former tormentor could be at the lodgings.

Of course, viewers know that Graham had gone there to beat Pierce up as a warning to keep away from Rhona.

Luckily for Rhona, Pierce was not at the flat when she arrived and started snooping around.

The episode ended with Pierce returning to the flat and finding out that Rhona had been looking for him.

The clearly unhinged villain said: “She’s found me, and soon we’ll be together again…”

Does Pierce really believe there’s a chance they will reconcile?

Viewers are terrified that Pierce may end up hurting Rhona again, with one tweeting: “Rhona is in for a world of sorrow when Pierce turns up again.”

Another said: “Pierce will kidnap Rhona, I suspect. There will be a big, dramatic ‘seige’ situation, as he is clearly STILL of the mind that she will forgive him. What a psycho. He has to DIE, surely?”

A third added: “I have a feeling he’s going to kidnap her or something along those lines.”

“No, no, no, I do not want to see him back, he will destroy Rhona,” exclaimed one more, while another said: “Why do I feel like history will repeat itself?”

Pierce will kidnap Rhona, I suspect. There will be a big, dramatic 'seige' situation, as he is clearly STILL of the mind that she will forgive him. What a psycho.

He has to DIE, surely?

Spoilers tell us that Pierce DOES return to the village… While actor Jonathan Wrather, who plays Pierce, has warned us that Rhona is in danger as are all the residents of the village!

Are you worried for Rhona? Leave us a comment on our Facebook page @EntertainmentDailyFix and let us know what you think!