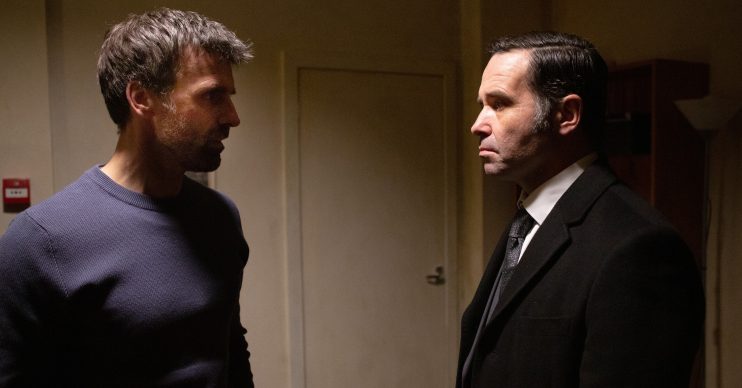 Pierce is delusional about murdering Graham

Evil Pierce murdered Rhona’s partner Graham last night on the soap after a vicious fight in the woods.

According to the actor who plays rapist Pierce, he has convinced himself that Rhona needed protecting from Graham and so he killed him.

Speaking to press about the dramatic comeback he said: “He wants to rescue Rhona. He knows he has been a violent man himself, he’s been coercive and abusive on an emotional level, but he can see Graham is a danger to Rhona.

“Pierce reads these characters well from experience, including from his time in prison.

“He literally wants to save Rhona from herself for a very poor decision, like she did with him. Pierce admits that. He’s on a moral crusade – he’s her rescuer, her so-called knight in shining armour.”

He’s provided a service and changed her life for the better, he believes.

The deranged behaviour is likely to continue to shock viewers in the next few weeks as the impact of Graham’s death is felt and Pierce sticks around.

Jonathan added: “For him, it’s justifiable. He’s helped Rhona and saved her. Somehow he can compute that and deal with that, somewhere in his conscience.

“Although that’s probably pretty skewed! For him, he’s provided a service and changed her life for the better, he believes.”

And worst of all – Pierce is insistent that Graham is ultimately to blame for his own death.

Jonathan said Pierce would never have returned to the village or to Rhona if Graham hadn’t tracked him down and attacked him.

He said: “I think he most definitely would. He feels that Graham was the catalyst for what happened. Graham writes his own end, effectively!

“Graham is to blame in Pierce’s mind – he feels judged and humiliated. Pierce feels that no-one has the right to do that when he is getting his life on track.

“He had no intention of contacting Rhona, he was just getting on with it, until Graham came to meet him.”

What did you think of Pierce’s comeback and justification? Leave us a comment on our Facebook page @EntertainmentDailyFix and let us know what you think!