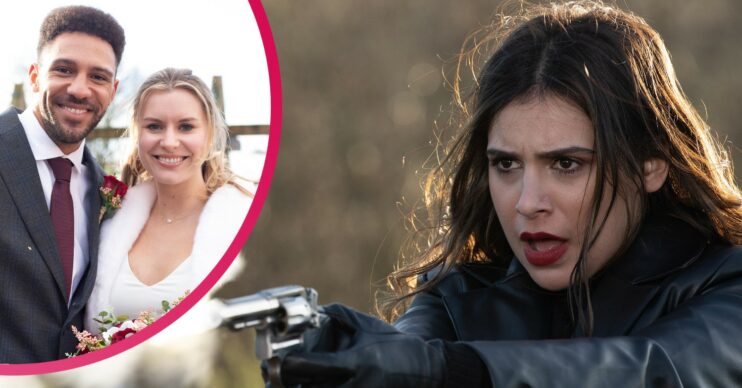 Emmerdale star Paige Sandhu has teased what’s to come with Meena in this week’s episodes.

Meena returned to the village last week to get revenge on Billy and Dawn, who got married in tonight’s episodes (Monday, February 14).

The episode ended with Dawn getting into a limo, however she was horrified to realise Meena was the driver.

Later this week, spoilers reveal Meena kidnaps both Billy and Dawn and takes them to a remote viaduct.

Read more: 5 Emmerdale characters who can save the soap

Meena reveals she will kill them both unless Billy chooses which one of them will die.

As Billy insists he’ll take a bullet for Dawn, Meena pulls the trigger. But who has been shot?

“It’s the final showdown between Billy, Dawn and Meena and Meena sort of gets her revenge on every man that’s ever messed her about in the past and puts it all on Billy and Dawn.

She added: “It’s a wedding in Emmerdale and they’re always exciting, something always happens so you have to watch just for that.

“I think the writing is at its best in these scenes in particular. I think that the audience enjoys Meena’s one-liners, her sarcasm, her wit and Billy and Dawn’s amazing characters, their goodness, the darkness in Dawn’s character and her history and I think they all just play off each other really well.

“So watch for that.”