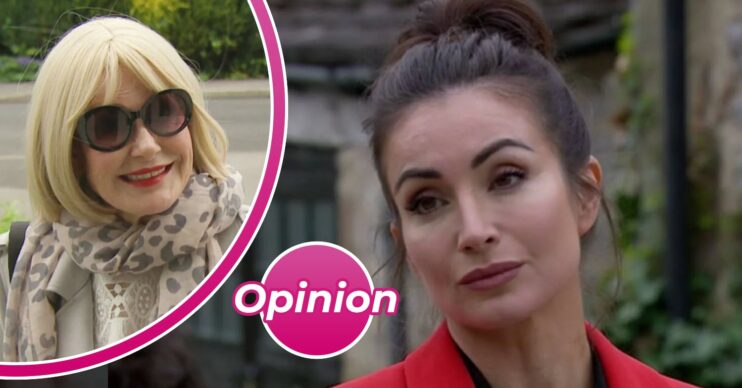 Emmerdale OPINION: We need some happiness – all this misery is too much

Emmerdale is slowly destroying us all with all the misery.

How much downbeat trauma can one village contain? At this rate it’s making Pompei look positive.

Watching an episode of the Yorkshire set soap is now akin to having a therapy session where they encourage you to be utterly depressed.

Misery likes company – we’d never have guessed from the state of the pity party in the Dales.

We’ve got Leyla’s drug addiction and subsequent fall-out with the apparently terrifying drug dealer going on.

Meanwhile she’s lashing out at everyone close to her and her husband – the highly-educated doctor – has so far been blissfully unaware of what exactly is going on under his – and her – nose.

He knows now, though, after she took an overdose and is threatening to end their marriage. So more misery then!

And speaking of – Chas Dingle’s most obvious affair with Al Chapman.

It would be funny if it wasn’t so seedy.

Emmerdale needs to lighten up and fast

There’s only so many walks someone can do in high heels and a tight red dress before even trusting Paddy would think something was amiss.

It would be one thing if the pair had any chemistry – but they really do not, and they are two of the most unpleasant characters ever to sully the village.

Add into all of that a teen pregnancy.

Because who doesn’t love a whodunnit concerning potential statutory rape?

It’s just all very downbeat, misery-inducing and awful. The real world might not be much better but at least there’s hope in the real world.

In Emmerdale you’d be Googling Dignitas after catching a cold in that village.

The only escape from the abject misery invading the Dales with every passing episode, ironically, is terminally ill Faith Dingle.

She’s in a great mood.

Read more: Emmerdale fans are all saying the same thing about ‘thick’ Leyla

But then you would be, wouldn’t you? Knowing that your time in Miserydale is soon coming to an end.

Give us some happiness – anything, please!