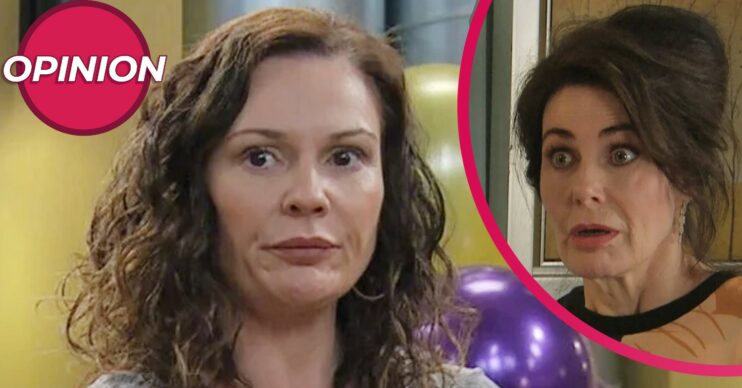 Emmerdale OPINION: Chas Dingle is awful – why are they ruining her?

Enough of the misery and nastiness!

Chas Dingle in Emmerdale has been the beating heart of the village for many years. But not any more. What has happened to her?

There’s no denying Chas has had a tough year, but she’s had tough years before and hasn’t behaved the way she is doing now.

The soap seems intent on ruining a once brilliant and integral character.

Read more: How old is Chas Dingle in Emmerdale? What’s her real name?

Let’s look at everything that’s happened to Chas recently.

She lost her job and her home when Al burned down the pub.

But she has a husband, a daughter and a roof over her head, and a pretty penny in her pocket after selling the pub.

Plus, Charity bought the pub and offered her her job back.

Yet all Chas did was whinge and try to take revenge on Charity. For what? Digging her out of a massive hole? Giving her money and a job and a place to live?

And it’s not just the misery, is it?

Last year she launched an astonishing attack on fragile Liv Flaherty, blaming her for son Aaron leaving the village.

Make no mistake: I am not vilifying Chas for being a strong woman, Soapland is made for those and I love them.

But this has gone beyond her being strong and leading her family, the way she treated Liv was little more than aggressive bullying of someone clearly very vulnerable.

And now she’s found out her mum has terminal cancer…

Of course we all expect Cain to react the way he does. Stomping about, hitting out and generally being horrible.

But Chas’s reaction is to lash out at Moira, force Faith to continue with chemo that she doesn’t want and then CHEAT with arch enemy Al.

She can probably be forgiven for the first two.

It’s fair she feels angry over the secret that’s been kept from her.

And who wouldn’t want to do all they could to lengthen the life of someone they love?

But when Faith explains next week she doesn’t want to continue with her chemo, Chas just doesn’t listen. She goes on a one-woman crusade to force her mum to keep up with the grueling treatment.

Sure, this is understandable, but the Chas we know and love would have more awareness than this.

When she tragically discovered her baby, Grace, wasn’t going to survive post-birth, she handled it so well. Heartbreaking, but she knew what she had to do. Where is this Chas now?

Her forcing Faith into chemo aside, what is with this cheating?

Why on earth would she turn to him for comfort?

It makes no sense at all and with husband Paddy willing to do literally anything for her, it’s shameful she should react this way.

Chas has had affairs before – most notably with Cameron Murray who was dating Debbie Dingle – but it had seemed Chas had moved on from that.

Plus, she truly loved Cameron. No excuse for cheating, but an important point all the same.

What are fans saying about Chas Dingle in Emmerdale?

Viewers of the show agree.

Writing on Twitter one said: “Chas is such a miserable cow. She’s always got a problem with everyone.”

And a third wrote: “Chas appears to just suck the life out of the show these days.”

Of her upcoming affair, one said: “If Chas gets forgiven for her cheating because her mum is dying of cancer I will be so mad,” before adding: “Chas often gets away with bad things she does.”

“Remember when we liked Chas in 2016? Good times that,” added someone else.

Who is Chas Dingle in Emmerdale?

Chas arrived in Emmerdale in 2002 dressed as a nun to be the stripper for her cousin Marlon‘s stag do.

She had been married and had a son, Aaron, who she left to live with his father. She quickly took up with Carl King, but was heartbroken to discover he was cheating on her.

However, while most heartbroken woman eat ice cream and sob into a glass of chardonnay, Chas went through with the wedding planning, stealing all of Carl’s cash before jilting him at the altar.

Maybe revenge was sweet and maybe he deserved some payback, but I think Chas’s vicious streak certainly came out for all to see then, didn’t it?

When Carl attempted to rape her and she hit him over the head with a brick to get away, Chas suffered terribly. Carl later died and although viewers knew it was actually Cameron who came to finish off the job, Chas stood trial for murder.

She was found not guilty and returned to the village to take up with Cameron: right in front of heartbroken Debbie’s face. I don’t think that’s a particularly nice thing to do, is it?

Chas has been guilty of so much more too: she stabbed Diane while suffering from PTSD after finding out Cameron was a serial killer.

In all of these stories she’s always the wronged party seeking justice in some way other than the law. But what sort of mind, wronged or otherwise, comes up with such schemes? Or has the brass neck to go through with them? I’ll tell you: someone who’s not actually that nice.

She constantly talks down to Paddy, seems to have very little respect for him, and lords around the Woolpack like she’s better than everyone else. And now she’s going to cheat on him!

Chas needs to take a look at herself

Chas is hardly whiter than white. Nor, in fact, are any of the Dingles. Why she thinks she can lash out and act better than everyone else is beyond me.

When she hit out at Liv last year was when she really lost it for me.

Sure, Chas was upset Aaron left town. But he hadn’t gone to the moon. He didn’t die. He just moved away. And he even asked his mum to look out for Liv for him.

But what’s the first thing she did after he left? Told Liv she was dead to her and LIED that Aaron hated her.

Poor Liv was totally distraught, but there wasn’t even a flicker of regret or remorse from Chas, who promptly informed the Dingles they all had to disown Liv too.

And then, when Meena’s guilt was revealed and Liv was released, Chas barely even apologised.

She just carried on as if she’d always supported Liv.

Let’s not forget as well, the way she treated Cain when he was trying to help her get rid of Al – she disowned him!

Best no one tries to do anything nice for Chas or you’ll be out on your ear.

How can Emmerdale save Chas?

When I think of the powerhouse performances of Lucy Pargeter when Grace died, or how she supported Aaron through his abuse at the hands of his father, it makes me sad Chas is being so poorly portrayed.

Lucy is so much better than whingey, mopey, quite frankly nasty Chas.

She is sparky and witty and crying out for some proper meaty drama that only Lucy can do justice to.

With Faith not having long to live, we will get to see Lucy show her acting mettle during some emotional scenes in the near future.

I know she can put in heartbreaking, award-winning performances and I can’t wait to see them again.

What do you think? Has Chas gone too far? Leave us a comment on our Facebook page @EntertainmentDailyFix and let us know what you think!