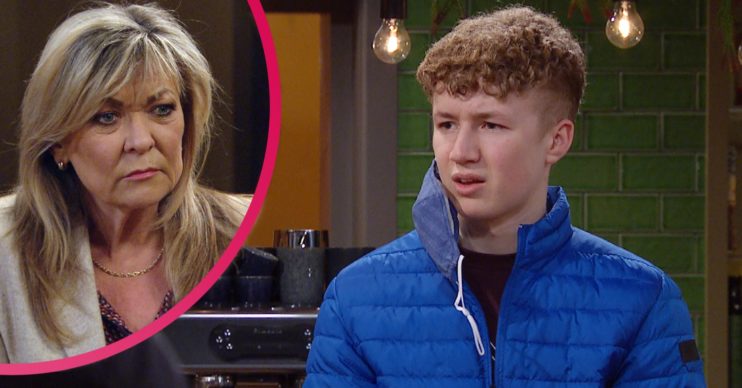 Noah has been working at Home Farm recently

Emmerdale fans have a new theory that Noah Dingle is poisoning Kim Tate.

A few weeks ago, viewers discovered that someone has been spiking Kim’s brandy decanter. But who is behind the poisoning has remained a mystery.

Meanwhile Kim has struggled with her memory and began falling asleep whilst working, leading her to worry she could be in the early stages of dementia.

Over the last few weeks, fans have come up with different theories as to who could be the one spiking Kim’s drink.

But now fans think that Noah Dingle could be the one behind it.

Over the last couple of weeks, Noah has been working at Home Farm and secretly working for Jamie to spy on Gabby Thomas, as he suspected she could be up to something.

In last night’s scene s(Wednesday, May 19) Noah was having a look through the Home Farm living room trying to get a look at Gabby’s laptop.

But fans think he could be behind the spiking as the Dingle family and Tate family have had a long-running feud.

Is Noah related to the Tate family?

Whilst the Dingle family and Tate family have had a long running feud, Noah is the son of Charity Dingle and Chris Tate.

Chris died in 2003 before Noah’s birth. This makes Noah the half brother of Joe Tate and nephew of Jamie.

Who are the other suspects?

Fans have come up with numerous theories as to who could be the one poisoning Kim.

Some fans think Gabby could be the one behind it, or Jamie’s secret girlfriend Dawn Taylor, who Kim has made clear she doesn’t like.

Other fans have suspected Dawn’s dad, Will Taylor, who was furious with Kim after discovering she spiked Dawn’s drink a few months ago.

Some have even suggested Joe Tate could secretly be back in the village and be the one spiking Kim’s drink as revenge for trying to kill him.