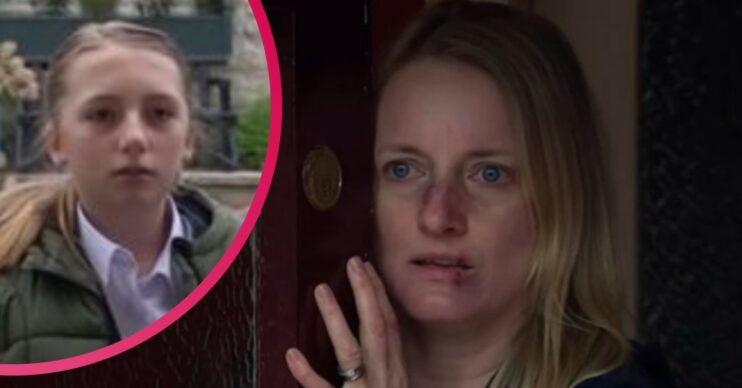 Emmerdale fans are predicting a horrifying twist for Nicola King and her attackers.

The councillor was savagely attacked by a gang of girls this week, leaving her battered and bruised.

She was returning to her car after a day out with Laurel and Bernice when she ended up in a row with a teenage girl.

However things took a turn when the girl revealed she was with a gang and they attacked Nicola.

The group tormented Nicola, stealing her bag and going through her belongings in front of her.

Taunting her they threw her phone and car keys to the floor and forced her to crawl to get them.

But as Nicola picked them up she was knocked back down – and savagely beaten.

Kicked repeatedly by one of the girls, she begged for them to stop hurting her.

Emmerdale: Is Nicola King’s daughter Angel one of her attackers?

However one of the gang, who’d lingered in the background, did briefly stop after the attack and apologise to Nicola before running away.

And fans think they know who it is – and she’s very close to Nicola.

During last night’s episode, Nicola’s daughter Angel visited her mum and let slip that she knew about the attack.

She asked her mum: “Have they found the girls that attacked you yet?”

Nicola was taken aback by Angel’s question and ask her: “How do you know about that?”

However fans are sure there’s more to it than that.

One asked: “Was Angel part of the group who attacked Nicola #Emmerdale?”

A second said: “Bet one of them girls in Emmerdale is Angel #emmerdale.”

Viewers have seen how Nicola is struggling to cope in the aftermath of the attack.

She has been left terrified to leave home, and is convinced the gang will return to harm her children.

But how would she cope with the bombshell that one of her kids was involved?