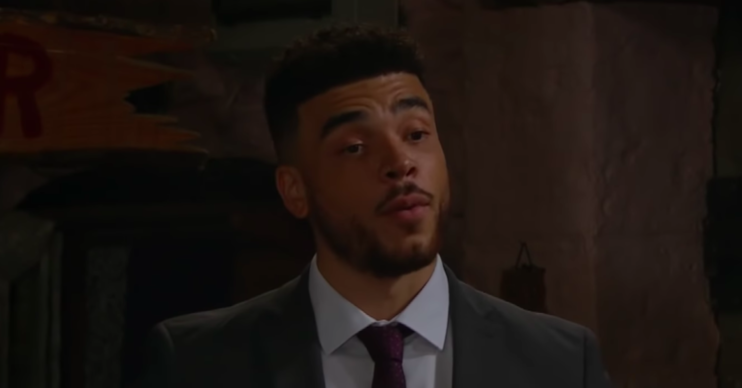 Nate was told he was facing five years in prison

The farmer had confessed to Moira Barton’s hit-and-run to save his cousin Belle from being framed by Jamie Tate.

And just days before the trial he was warned he faced a substantial custodial sentence.

The lawyer even said he could be away from his family for five years in devastating news.

However, in last night’s episode, it was all miraculously waved away.

After he went to court with pregnant girlfriend Tracy Metcalfe for support, there was shock in the Dingle house as they both returned.

After a long pause she then added: “Suspended sentence.”

Nate then walked in with a whopping grin on his face.

He admitted: “I really thought they were going to send me down.

“I’ve still got a criminal record. They’ve given me an 80 hour community order and they’ve suspended me from driving for six months.”

Belle's thrilled for Nate, even if Cain isn't… #Emmerdale pic.twitter.com/CxC3v8pkZV

If Cain can forgive Moira, why can’t he forgive Nate? @emmerdale let’s face it Nate has a much better excuse for his actions than Moira

Viewers couldn’t quite believe that Nate had narrowly escaped being sent to prison.

“Nate got 2 years suspended sentence. He got off with that lightly,” said one.

Another added: “Nate is VERY lucky to get off so lightly.”

He nastily told him: “I wasn’t going to visit you anyway.”

And it may have something to do with the fact he has now reunited with estranged wife Moira.

The pair only split because Nate seduced her into it as part of a revenge scheme against his dad.

Earlier this week, Cain and Moira were locked in a barn together – and ended up finally having the conversation.

Moira confessed her love but Cain rejected her and eventually she decided to leave the village.

However, before she had the chance, Cain realised what he could lose and went to see her.

Moira was up driving the tractor on the field when Cain approached her and said: “Of course I love you woman.”