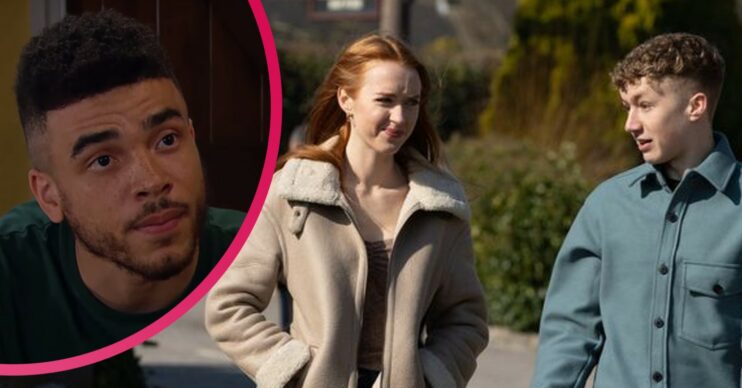 Will Nate have his second baby in as many years?

Emmerdale fans are convinced there will be a ‘who’s the daddy’ mystery for the ITV show’s 50th anniversary.

However, they remained silent on who the mother would be.

“There will be a new baby arriving in Emmerdale before the end of the year,” executive producer Jane Hudson said.

“I think that’s not giving anything away as there are so many female characters in the show, but there will be a new arrival before the year is out.

“There’s probably going to be a birth in the anniversary month perhaps!

“Babies in soaps are either born on programme celebrations or Christmas so there’s going to be one of those happening.”

But now fans think they have worked it out.

They are convinced Chloe Harris will be the one going into labour in October.

And more than that, fans are convinced it will begin a who’s the dad storyline for Chloe and her past lovers.

In recent weeks, Chloe has slept with Noah Dingle before dumping him and moving on with Jacob Gallagher.

The pair shared a one night stand as he coped with his grief about murdered girlfriend Leanna Cavanagh.

And next week, Chloe will bed Nate Robinson in a shock development.

One fan suggested Amelia Spencer could be the woman giving birth – but others had other ideas.

A second replied: “Probably be Chloe, and it will be another who’s the daddy.”

A third added: “Don’t forget Noah as another candidate because although we know he didn’t exactly have the oomph, it surely is theoretically possible that he could have still done enough to get Chloe pregnant.”