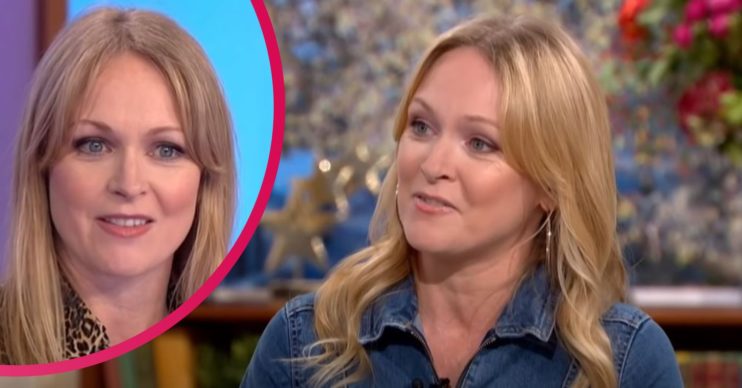 Michelle is currently off the soap to have her first baby

Emmerdale star Michelle Hardwick has shown off her growing baby bump in a sweet family picture.

The Vanessa Woodfield actress and her soap producer wife, Kate Brooks, took their dog Fred for a walk in their local park and snapped a picture of them all together.

What did fans say about Michelle Hardwick’s bump photo?

Michelle looks blooming and in great health as she poses in her leopard print lips T-shirt.

Fans loved the picture and flocked to tell her in the comments.

One said: “Beautiful photo photo of you and Your wife.”

The actress has been absent from the soap for months after having to shield due to the pregnancy.

The actress revealed their baby is due in October.

She is unlikely to return to the soap until after her maternity leave ends.

But fans are already missing her greatly.

In Wednesday’s episode (July 22) Belle and Bob spoke about Vanessa and Charity and how Vanessa’s cancer treatment is going.

Belle confirmed that Charity would be taking Vanessa to her mum’s for a ‘a bit of RnR’ after her chemotherapy.

Vanessa wasn’t seen on screen but Charity later confirmed she had dropped Vanessa off.

Fans were devastated, with one saying: “Charity being with Vanessa at chemo before taking her up to her Mum’s.

“I MISS THEM SO MUCH #Vanity #Emmerdale”

A second said: “I’m going to miss Vanessa Woodfield even more if I have to endure endless scenes of the increasingly irritating Dan and Amelia. I don’t deserve this, I’m loyal! (And cute)#Emmerdale.”

A third said: “Vanessa staying with her mum feels like a snippet of what we wanted. (Only we won’t be seeing any of it).

“Hoping that when she returns we’ll get more of that relationship.

“Going to miss this little ray of sunshine. So much. #emmerdale.”

Do you want Vanessa back in the village? Leave us a comment on our Facebook page @EntertainmentDailyFix and let us know what you think!