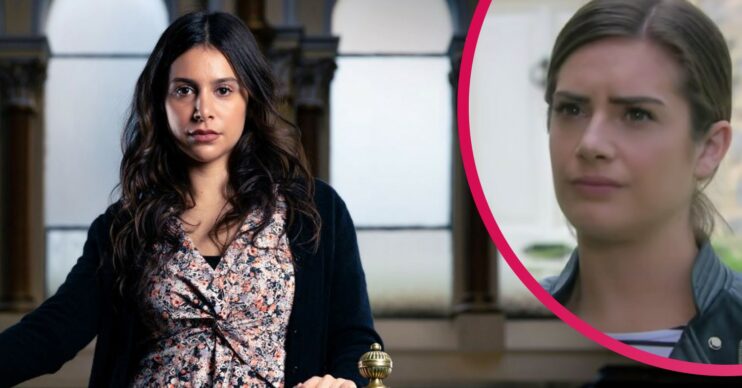 However fans were quick to notice a plot hole as Emmerdale villagers went to court and the trial began.

Viewers know Meena is currently on trial for the murders of Leanna Cavanagh, Andrea Tate and Ben Tucker.

In last night’s scenes, Liam, Carol, Charles and Leyla went to court to see the beginning of Meena’s trial.

Liam took to the stand to testify against Meena.

Meanwhile David Metcalfe, Victoria Sugden, Billy Fletcher and Dawn Taylor were all in the Hide being served by Liv Flaherty.

David, Victoria, Billy and Dawn explained they didn’t want to go to court.

However fans were questioning why David, Victoria, Billy, Dawn, Liv and Vinny weren’t in court or being called as witnesses, considering Meena’s crimes greatly affected all of them.

Dawn, Billy, David ,Victoria , Leyla, Priya , Vinny and Harriet would have all been called to court surely #emmerdale

Wouldn’t Dawn, Billy, David and Victoria all have been called to give evidence? 😐 #emmerdale

Why don't Dawn & Billy have to give evidence? Meena did kidnap & try to kill Dawn! #Emmerdale

So why don't Billyband Dawn have to give evidence then and Leyla for that matter, surely they are vital?

One wrote: “Where is Vinny? He would’ve been called to give evidence. Nobody seems to have mentioned it or the video of her trying to kill Victoria.”

A second said: “It wouldn’t happen. Where is Vinny’s evidence and the rest of them. It’s rubbish.”

What did Meena do to Vinny, Liv, Billy, Dawn, Victoria and David?

Meena has committed numerous crimes during her time in the village.

Last year, while in a relationship with Meena, David planned to break up with her as he had fallen for Victoria.

When Meena found out, she attempted to drown Vic, who was unconscious at the bottom of a waterfall.

Meena allowed Liv to go to prison for Ben Tucker’s murder and kidnapped her husband Vinny after he discovered Meena kidnapped her sister Manpreet.

Meena then kidnapped Billy and Dawn on their wedding day and tried to get Billy to choose who died.

They both survived but witnessed her shoot Leyla Harding.

Did you see Jeff and Zoe’s scene together in Emmerdale? Leave us a comment on our Facebook page @EntertainmentDailyFix and let us know what you think!