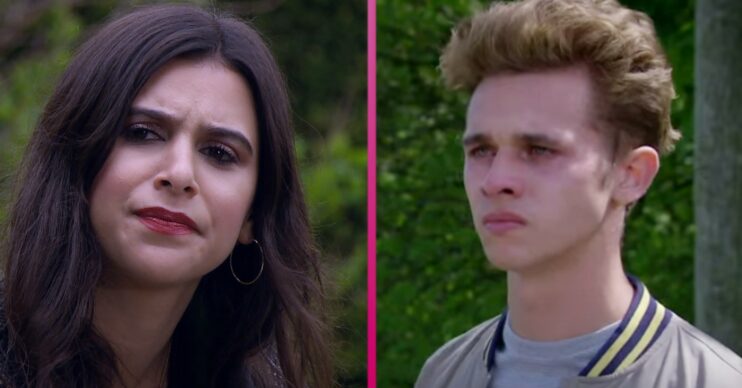 Emmerdale fans have a theory that Meena Jutla will frame Jacob Gallagher for Leanna’s murder.

She began to question Meena about Nadine’s death and Meena let slip that she killed her.

Terrified, Leanna tried to escape Meena but ended up twisting her ankle.

When Meena caught up to Leanna on the humpback bridge, she pushed the teenager off the bridge.

Leanna fell to her death and Meena went down to her body.

At the time of her death, Leanna was wearing a ring, which was given to her by Jacob. However Meena decided to take the ring and has been wearing it around her neck.

The next day, Leanna’s body was found by Bernice and news spread that the young girl had died.

Liam was devastated by his daughter’s death. The police soon told him that they believed Leanna’s death was an accident.

However fans are thinking that Meena will find a way to pin Leanna’s death on Jacob to get rid of him.

When Meena kills Leanna, I bet Jacob gets framed for her death. #Emmerdale @emmerdale

Last year Jacob went to Portugal to visit his adoptive mother Alicia and to work on a boat.

He returned to the village last month, however his return ruined Meena’s plans to move in with David.

Meena was furious when David told her she would have to wait to move in so he could spend some time alone with his son.

In an attempt to get rid of Jacob, she stole the Pride charity tin and made it look as if Jacob took it. However her plan backfired as David wanted to spend more time with Jacob.

Could she frame Jacob for Leanna’s death?