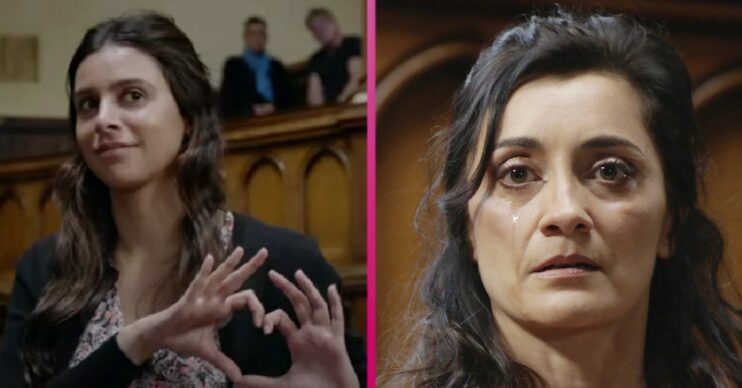 Emmerdale: Meena torments Manpreet in court and fans are all saying the same thing

Emmerdale fans have all been saying the same thing as Meena tormented her sister Manpreet in court in last night’s episode (Tuesday, April 12).

Manpreet took to the stand to testify against her sister. But fans were all baffled by Meena’s gesture.

Currently in Emmerdale Meena is on trial for the murders of Ben Tucker, Andrea Tate and Leanna Cavanagh.

Her trial began this week and in last night’s episode it was time for Manpreet to testify.

On the stand she told the jury about Meena growing up, their past and how Meena held her captive.

But as Meena was watching Manpreet, she held up her hands to form a heart, clearly to torment her sister.

Fans were left wondering how none of the jury or the judge saw Meena’s obvious hand gesture.

#emmerdale Meena openly mocking the witness right there in court, and NOBODY. Not the judge, the lawyers, or the jury, noticed. It's like the writers gave her super powers to only be seen by those she wants to see :/

And the jury don’t see Meena doing that?! FFS #emmerdale

As if that would ever be allowed in court

Good God that jury as said not a chance that woman front row raising her eyebrows shaking head like oh yes as if your telling the truth kidnapped one on a drip ect ..we know you write for dramatic effects but really .amongst other gaffs .guard will drop her in it

Manpreet told the court how Meena held her captive and drugged her.

She told the court how Meena boasted about murdering Nadine, Leanna, Andrea and Ben.

However the defence soon questioned Manpreet and painted her out to be a liar, bringing up her past with Charles and her marriages.

Will the jury believe Manpreet?

This week Meena rehearses her lines in her cell as she prepares to talk in court.

Meena is utterly convincing as she takes the stand in court, playing the victim.

She delivers the performance of a lifetime to an enthralled jury.

But will she convince them she’s innocent, or will they see through her lies?

Later, the court awaits the verdict in agonising tension.

The following day, the shocking events of the trial hit the news.