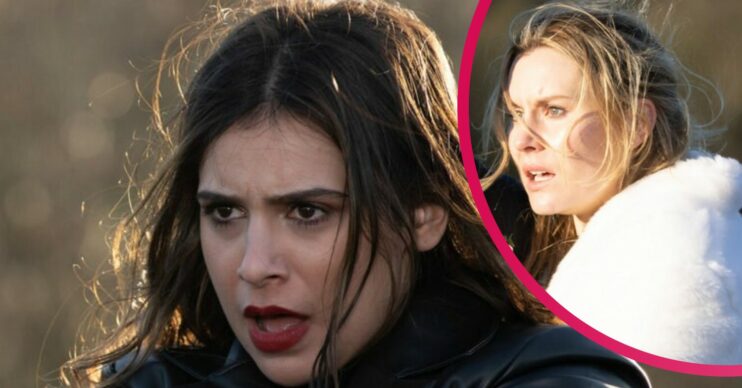 The weekly broadcast report from the television regulator revealed that some people weren’t happy with the episode that aired on Tuesday February 15.

What happened in the Emmerdale episode?

Meena had returned just in time for Billy and Dawn‘s wedding reception and kidnapped the bride and groom.

She took them to a remote viaduct and told Billy he had to choose who was going to die.

Of course, devoted husband Billy chose to save his new wife.

Meanwhile, back in the village, the wedding guests were getting concerned so Leyla went to look for them.

As she came across them on the road, Meena shot at her car and Leyla fell unconscious at the wheel.

Meena then held Dawn at gunpoint over the viaduct, but at that moment Leyla managed to open her car door and fall out. It was enough to distract Meena while Dawn grabbed the gun.

Dawn then attacked Meena, reigning punches down on her. However, Meena put a stop to the assault by saying she had Dawn’s son, Lucas.

The camera then panned on to Harriet Finch, who had been looking after the lad, bleeding on the floor.

How many complaints did Ofcom receive about Emmerdale’s Meena?

It would seem despite the high drama, some viewers found it all too much.

They sent their complaints to Ofcom and 76 of them in total didn’t like what they saw.

Although Ofcom records shows that attract more than 50 complaints, it doesn’t necessarily investigate them all.

The report also states that the number of complaints doesn’t reflect the severity of the issue.

What happens to Meena next?

Meena might be behind bars, but determined to protect herself at all costs, she has been lying to save her own skin.

Despite the evidence stacked against her, Meena has not confessed to anything.

She has admitted she killed Ben, but insisted it was purely in self-defence.

After Liam deliberately pushed her over the bridge, Meena is determined to make him suffer too. She had him hauled in for questioning over what he did, however her sister Manpreet, lied to protect him.

She has called Charles to come and visit her so she can supposedly repent her sins. But her manipulation won’t end here.

Emmerdale has revealed Manpreet is in Meena’s sights as she is determined to take her sister down with her.

How far will Meena go? And what – or who – will finally be the end of her?