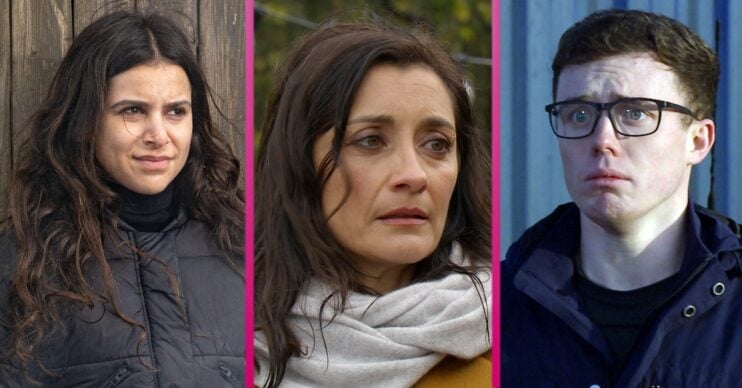 Emmerdale: Meena makes good on her promise to finish off Manpreet and Vinny ‘today’?

Is this the end for Manpreet and Vinny?

Emmerdale character Meena is holding Vinny and her sister Manpreet captive, but is she about to kill them?

Meena has been holding Manpreet captive since she was released from hospital following the Woolpack explosion. Now Manpreet knows of her sister’s crimes, Meena has no plans to let her go.

Last week, Vinny followed Meena to a barn and found Manpreet tied up. But before he could call for help, Meena knocked him unconscious.

She originally planned to kill him by using an IV drip to get alcohol into his system and stage a crash, making it look like he died in a drunk driving accident.

However in tonight’s episode (Tuesday, January 11) Manpreet managed to get out of her cables ties and went after Meena.

She injured Meena’s wrist but Meena managed to regain the upper hand and tied Manpreet up again.

When he found her in the surgery with a bleeding wrist, he confronted her about her pregnancy and miscarriage, saying he was aware there was no baby.

She then returned to the barn and told Manpreet and Vinny that Liam’s interference had changed her plans and it would be their final day alive.

What’s next for Manpreet and Vinny?

This week, Mandy starts to worry about her son when she finds out he never went to visit Liv.

Meanwhile Meena drives the Dingles van into the barn.

As she closes the doors, Manpreet and Vinny are terrified that there’s no escaping the fumes coming from the van.

Can they get away or will they been Meena’s next victims?

It’s not been revealed what will happen to Manpreet and Vinny.

However in next week’s scenes Leyla and Jacob survey the damage to the allotment.

Neither of them notice Meena’s trinket box is just visible as it sticks up from the earth.

Later Sam works on the allotment and inadvertedly shovels dirt across the trinket box.