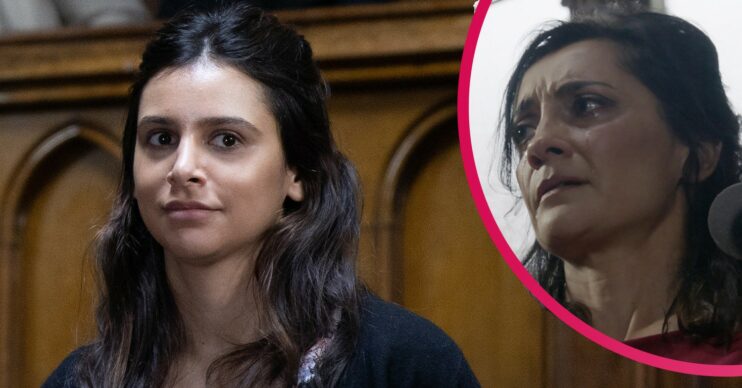 Meena is in court next week

Next week Meena will stand trial in court for the murders of Leanna Cavanagh, Ben Tucker and Andrea Tate.

Meena murdered the three villagers last year and also killed her best friend Nadine before moving to the village.

However it appears Meena still has another bombshell to drop in the upcoming episodes.

In an interview with Entertainment Daily and other media, Rebecca was asked to tease how Meena’s bombshell would impact Manpreet.

She said: “Yeah, Meena has one more horrible, horrifying confession to make. One that, above all her crimes, might have the potential to plague Manpreet for the rest of her life.

“And I would say it’s a crime very, very, very close to home.”

What could it be?

Read more: Emmerdale: Who plays Meena’s prison officer? Where have you seen Dean Smith before?

Tensions spike as Meena enters the courtroom basking in the spotlight.

Liam gets ready to testify and the jury seem sympathetic towards him. However the defence begin their accusations and accuse Liam of having an affair with Meena.

Liam’s rage gets the better of him and he ends up lashing out at Meena.

Manpreet also stands up in court to testify. The defence delve deep into her past and portray her as a liar.

Later Meena is advised against taking the stand, but she rejects the advice wanting to allow her ego into the limelight.

She prepares for the next day rehearsing her lines in her cell.

Soon Meena takes the stand in court, playing the part of a meek victim. She delivers the performance of a lifetime to an enthralled jury. But is she convincing enough?