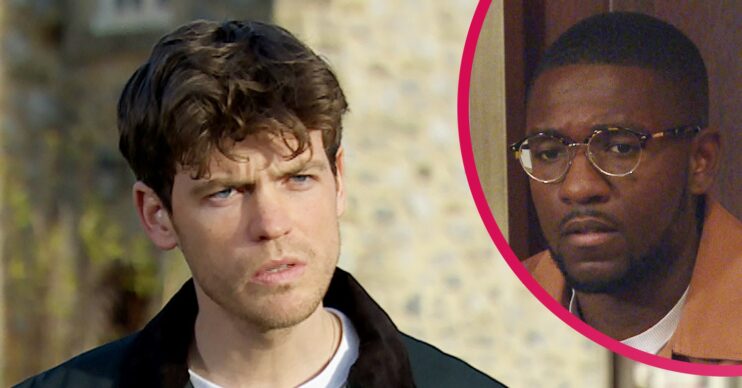 Emmerdale fans have been growing increasingly suspicious of Marcus, believing he’s not to be trusted and there could be a ‘dark twist’ ahead.

Marcus is the son of rapist and murderer Pierce Harris. He arrived in the village earlier this year to see Rhona after learning his dad was dying.

Although he’s been in the village for a few months and started a relationship with Ethan Anderson, fans think he can’t be trusted.

Read more: Who plays Pierce’s son, Marcus in Emmerdale? What do we know about Darcy Grey?

In this week’s scenes, Ethan decided to move into Tall Trees as there was a room up for rent.

Marcus helped his boyfriend with the move. However when the two settled in to have a night in together, Marcus was annoyed when Ethan got called into work.

Solicitor Ethan went down to the police station to represent a man named Jordan who had been arrested for assault.

Ethan was shocked to learn Jordan’s victim was his neighbour Billy Fletcher.

Jordan claimed he was acting in self defence. But in hospital Billy told his wife Dawn that the attack was racially aggravated.

Later when Ethan returned home Marcus clearly wasn’t happy Ethan had been gone most of the evening.

However fans are now convinced that Marcus is dodgy and may even have a connection to Ethan’s client Jordan.

I think Marcus will know the thug who attacked Billy the one Ethan is defending.. I’ve not read it anywhere I’ve just read it’s quite a long storyline and I’m sure @Sharontweet said there are twists or someone along them lines. So it’s just my thought #Emmerdale

Ooh… Bear & Mary going to happen?
Marcus slowly showing similar traits to his father
Leyla's cause an unnecessary amount of shit for Jai. For once I felt for him.
Bear & Marlon are sweet with their homeschooling situation 😂
Kim & Dawn need more scenes. #emmerdale

I reckon there is something to Marcus we don't know yet, bit shifty .

Suspicious that this bloke #Ethan is representing is one of #Marcus’ friends? #Emmerdale

I can't put my finger on it but there's something about Marcus I just really don't like and don't trust! #Emmerdale

So what’s the deal with Marcus? Is he playing Ethan along. I’ve never seen someone so unenthusiastic #emmerdale

Emmerdale: Who is Marcus Dean?

Marcus first appeared earlier this year when Pierce Harris got in contact with Rhona to tell him he’s dying and wanted to reconnect with his son, Marcus.

So what’s the deal with Marcus? Is he playing Ethan along?

Rhona managed to get in contact with Marcus, but he soon turned up in the village surprising Rhona.

Pierce died before Marcus could see him and Ethan helped Marcus with Pierce’s estate.

The two then began dating, but can Marcus be trusted?

What do you think of Marcus in Emmerdale? Leave us a comment on our Facebook page @EntertainmentDailyFix and let us know what you think!