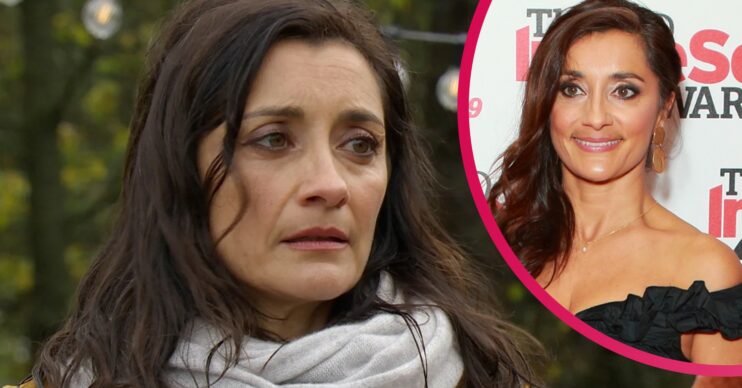 The actress is training for ITV show The Games

Emmerdale star Rebecca Sarker, who is best known for playing Manpreet Sharma, has stunned fans with a beautiful gym selfie.

The 47-year-old actress had a youthful glow as she smiled for the photo, which she posted to her 21.6k followers on Instagram.

Captioning the snap, the actress shared: “No overtaking on the outside lane today. Tired and slightly wired @thegamestv.”

Michelle Hardwick wrote: “Beautiful inside and out.”

Matty Barton actor, Ash Palmisciano, posted some supportive emojis, while Sair Khan added: “So excited to see you on The Games!! My Queen!!”

In addition, one fan said: “I said to my husband… that I think… you are the most beautiful woman in the world.”

The Games, which will air on ITV, is set to be hosted by Holly Willoughby and Freddie Flintoff.

It will feature a whole load of our favourite celebs, including Corrie’s Colson Smith, Love Island’s Wes Nelson and actor Ryan Thomas.

The six male and six female competitors will battle it out in a selection of sporting events, all broadcast live.

And Rebecca’s on-screen life is looking just as testing.

A few weeks ago, at her plea hearing, her sister Meena pleaded guilty to all of her crimes except the murders of Leanna Cavanagh, Andrea Tate and Ben Tucker.

Manpreet soon realised she’d need to testify, causing her to have a panic attack.

When boyfriend Charles urged her to go to the doctors, she ended up driving into the woods.

She was that upset, she ended up abandoning her car and phone and walked off into the night.

The next day, she was found by ex-husband Rishi, and she went on to tell Liam she couldn’t testify in court.