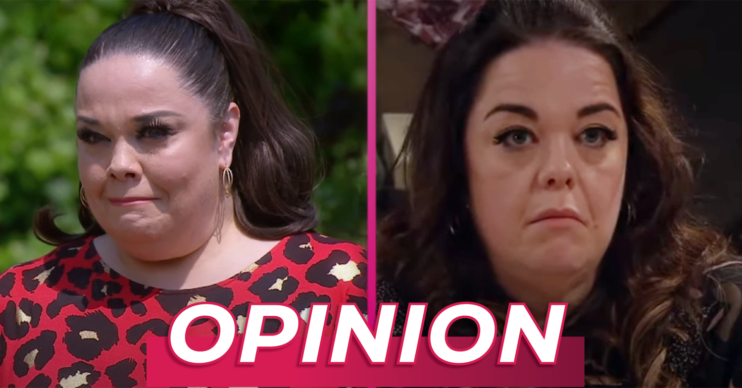 Mandy made a brief return to the Dales in January last year with a son, leaving viewers wondering if he could be the son of vet Paddy Kirk.

However Mandy and Vinny returned again in September on a more permanent basis.

As time went on it was revealed that during Mandy’s 18-year absence from the village she had met a man named Paul and his baby son Vinny.

However Paul is now in the village trying to win Mandy back over. And the storyline feels a bit flat.

I really enjoyed hearing about Mandy’s backstory. And the lockdown scenes where she revealed to Vinny that she had a miscarriage after Paul abandoned them just goes to show how great an actress Lisa Riley is.

But I can’t help feel as if the character could have more to do and that she deserves a more thrilling storyline.

Emmerdale: What storylines should Mandy Dingle be involved in?

Right after Mandy and Vinny’s September return we learnt that she, Vinny and Charity robbed a casino.

Personally, I loved the flashback scenes and thought it was so interesting to see a Dingle heist.

I would like to see Mandy getting caught up in more schemes and plans similar to the casino heist.

Perhaps she and Cain could pull off a car robbery? We definitely need more Mandy and Cain scenes!

In terms of a love interest, I don’t think she and Paul are a good match. While they were together for years at one point, he did abandon them for at least a decade.

I do believe people can change, but I think Paul may be a bit too soft for Mandy. I’d like to see her involve herself with a new character.

I even think it would’ve been interesting to see her entangle herself with Malone.

It would even be interesting to see Vinny’s biological mum turn up looking for her son. Considering how protective Mandy is over Vinny, it would be electrifying to see how she handles his mum trying to come back into his life.

Let’s face it, Lisa is such a talent, she could tackle any storyline perfectly!