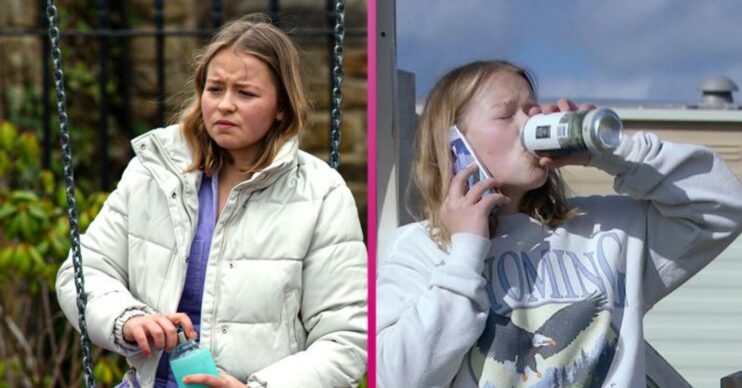 The teenager is back on the booze and fans aren't happy

Emmerdale fans have slammed Liv Flaherty and her alcoholism storyline saying it has ruined her character.

Viewers have watched in recent months as Liv has begun drinking again.

Struggling to cope with her guilt over Paul Ashdale’s death, she hit the bottle.

But while drinking she has hit ex Vinny Dingle, mocked her brother Aaron’s own sexual abuse history and lashed out at everyone.

And she has put her own life at risk – ignoring her seizures.

Now fans have hit out claiming the character is being ruined by the storyline.

One furious fan wrote on DigitalSpy Forums: “She’s 19, unemployed, uneducated, an alcoholic and has no life at all other than to drink and nosy into her older brother’s love life.”

A second said: “How they have developed her into this so unlikeable character has really spoiled this promising young actress.

“I really don’t like any of the scenes she is in at the moment.”

A third said: “Liv has been my fav Emmerdale character for a few years.

“However they really need to push on with this story as she is fast becoming unwatchable.”

A fourth said: “Liv was ruined when she was brought in as a Dingle! The best they can do to save her is get her away from them and Aaron.”

One said: “I was enjoying the character of Liv, a good actress: but making her a teenage alcoholic has spoiled her storyline.

“Liv doesn’t work, so where does she get the money for her continuous supply of vodka, which is very expensive I would think?”

A second said: “Why is Liv only an alcoholic in the house? You don’t see her outside of it. Makes no sense.”