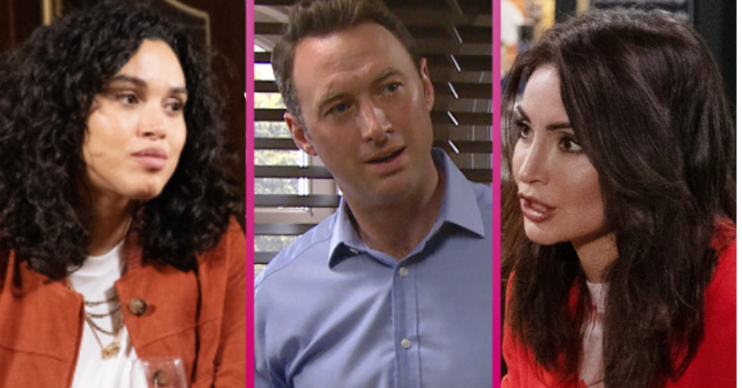 The doctor failed to make a diagnosis

They spotted that Dr Liam Cavanagh‘s professional skills seemed rather lacking, as he seemed to completely oblivious to the fact that his wife was high on cocaine!

The episode aired a shock twist when it was revealed to viewers that Leyla was a regular user of the Class A drug.

It also explained how Leyla and newcomer Suzy Merton were connected – she was Leyla’s drug dealer.

It was after Leyla and Suzy teamed up for another sort of business that the secret was revealed.

The pair have recently joined forces for their events business, and when they pulled off a successful new deal, decided it was time to celebrate.

So, Suzy cracked open the drugs – and Leyla happily got stuck in!

Later, Suzy returned to her partner Vanessa and Leyla headed back to hubby Liam.

Liam’s a fun sponge for Leyla

However, Leyla was in the mood for more fun. Liam wouldn’t have a drink with her, so Leyla insulted him before ringing Suzy, hoping to lure her back out for more partying.

The plotline was certainly a shock for viewers, but what also surprised them was that Liam – a qualified and experienced doctor – didn’t spot that his wife was clearly quite high on drugs.

“Liam’s supposed to be a doctor and he can’t tell his wife is high?” said one.

While another got more technical: “I don’t want to be picky but won’t Liam be able to tell that Layla is on drugs by looking at her pupils?” they considered.

Catching up on last night’s #Emmerdale. How does an experienced Dr like Liam not realise that Leyla is under the influence of something?!?

what TF?!
Liam’s suppose to be a doctor & he can’t tell his wife is high?
ridiculous.#Emmerdale

Liam, you’re a doctor…can’t you see Leyla’s irrational action is because she’s high as a kite #Emmerdale

#Emmerdale. I don’t want to be picky but won’t Liam be able to tell that Layla is on drugs by looking at her pupils?

Is Leyla in trouble?

With the coke plot only beginning, it remains to be seen how long Liam will remain in the dark about his wife’s addiction.

But will he realise before she gets herself in too deep?