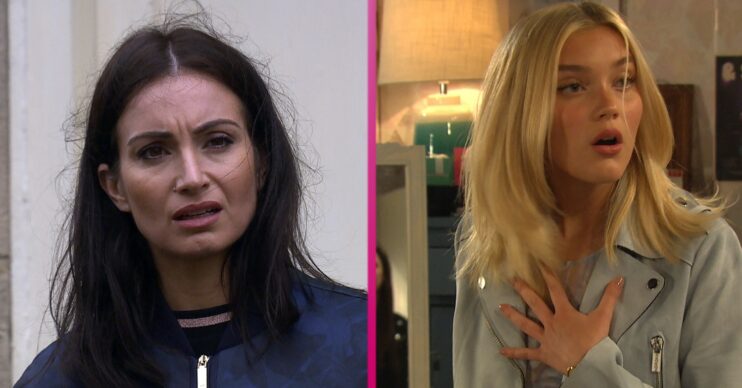 Emmerdale: Leyla Harding to be blamed for Leanna Cavanagh’s death?

Will her 'killer heels' present see her framed?

Emmerdale fans are predicting Leyla Harding will be blamed for Leanna Cavanagh’s death after the police rule it an accident.

Wedding planner Leyla bought her stepdaughter some very high heels for her 18th birthday party on the day she died.

Viewers watched as Leanna fell in the heels while attempting to flee from killer Meena Jutla.

And while fans know the truth of what happened – that Meena murdered her by pushing her over the bridge – they think her ankle injury will be blamed.

Emmerdale: Leyla to be blamed for death of Leanna?

Leanna’s death being ruled an accident means her ankle injury could be blamed for her tripping and falling over the wall.

And if that comes out, then Leyla will be blamed for Leanna’s death.

One fan said: “When the truth comes out could Liam actually end up blaming Leyla?

“Falling back into Bernice’s open arms? After all if not for the shoes & spraining her poor ankle Leanna might of stood a fighting chance.”

A second said: “Meena will get into everyone’s heads. Leyla’s fault: new high-heeled shoe made Leanna trip and fall.”

A third agreed: “Layla will get the blame from Liam because they will assume she tumbled off the bridge because of those ‘killer heels’ and the story will go on and on and on, while she kills and kills again.”

However, fans also spotted a fatal mistake Meena made during the kill.

In Friday’s Emmerdale, fans watched as the police’s crime scene investigators searched the scene for every clue.

And with a police investigation they will be sure to find signs of DNA on Leanna’s body.

Fans are now sure it will lead to Meena being caught as she will have no reasonable explanation for being all over the dead girl’s body.

One said: “Does Meena not know about forensics cos she left DNA all over Leanna, her room & the murder site.”

Another said: “I have this theory – Leanne grabbed Meena by her hair just before she was shoved over the bridge.

“Hopefully there’ll be some still in her hand and then MEENA WILL BE TOAST. #DNA”