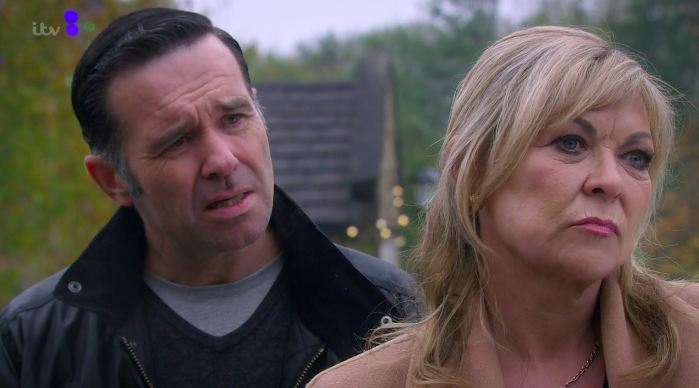 Kim has gone too far for viewers

Emmerdale’s Kim Tate disgusted viewers on Christmas Day by telling Graham Foster that his late son was better off dead.

Tonight after Kim discovered Graham isn’t her granddaughter Millie’s biological father, she celebrated by flinging the evil insult at her husband.

Worried about losing access to her beloved grandchild, Kim told Graham: “She’s my granddaughter, so you’re planning on giving me visitation and throwing me a bone?

“I will throw you in the river if you try something like that.”

Graham then told Kim he wasn’t Millie’s father but instead of celebrating, Kim twisted the knife further, telling him: “You’ve just said goodbye to any chance of getting my money.”

He replied: “If only you knew how insignificant you and your money are to me. I’m with a woman who on her worst day is worth one hundred times you.”

Not willing to let Graham get the last word, Kim used Graham’s past tragedy against him by saying: “Well look at it this way, Millie grows up with a wonderful father.

“It’s Christmas so let’s really look at the positives. Your own child who you killed is better off dead than growing up with you as a parent.”

Viewers were sickened by the horrific insult and took to Twitter to voice their rage.

One said: “‘Your own unborn child is better off dead than with you as a parent’ Way TOO far Kim, even for her #Emmerdale 😠”

A second said: “Kim is evil. Can’t stand her #emmerdale”

Later Graham stormed to Home Farm and exposed his sleeping with Andrea to Jamie, destroying the Tate family Christmas and setting up his upcoming murder.