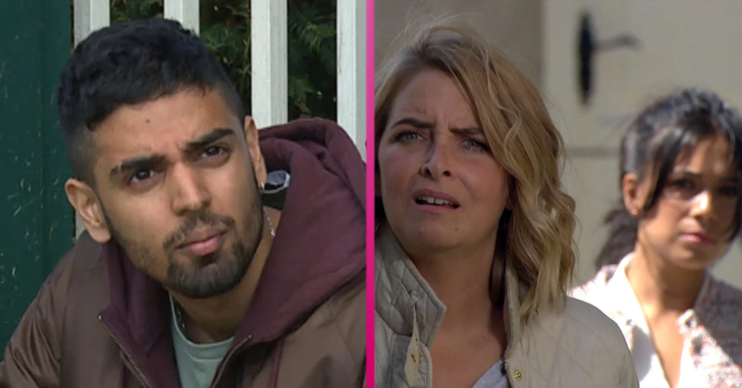 Emmerdale killer Kirin Kotecha is going to underestimate Charity Dingle when he blackmails her over son Johnny.

The killer is on the run after mowing down Paddy’s ex Tess and leaving her to die four years ago in the soap.

Next week he will make his return to the village to get money from his former step-mother Priya Sharma.

However once he sees how vulnerable Charity is to blackmail over Vanessa’s son Johnny, he decides to do exactly that.

But actor Rish Shah who has taken over the role, has admitted that Kirin doesn’t understand what he’s getting into.

“He’s got this arrogance about him and he tries to intimidate her. But I think quite quickly he realises she’s a fierce individual and is driven to do whatever she has to for the people she loves.”

And fans are already waiting for Charity to destroy him.

Rish added: “I’ve already seen a few tweets from people saying they’re excited to see Charity shred Kirin to bits, so I think they’re going to love seeing him maybe get what he deserves.”

Rish said “there are people who want to see this fight play out” and he hopes “they enjoy seeing all the drama because it’s definitely going to be very exciting”.

The actor said he believes that “initially Kirin is entirely tunnel-visioned on getting the money and getting away as quickly as possible”.

Rish said Kirin knows he “can’t be seen in the village” but “Johnny seems to be more of an after-thought for Kirin”.

He added that he thinks “everything Kirin says has to be taken with a pinch of salt”.

He concluded that “Kirin really reveals his true colours in the moment he finds out that Charity wants to adopt him”.

And he doesn’t even think twice when he discovers Vanessa is battling cancer – it’s all about him.

Rish added that Kirin “has come back for selfish reasons” and has got “a very blurred moral compass”.