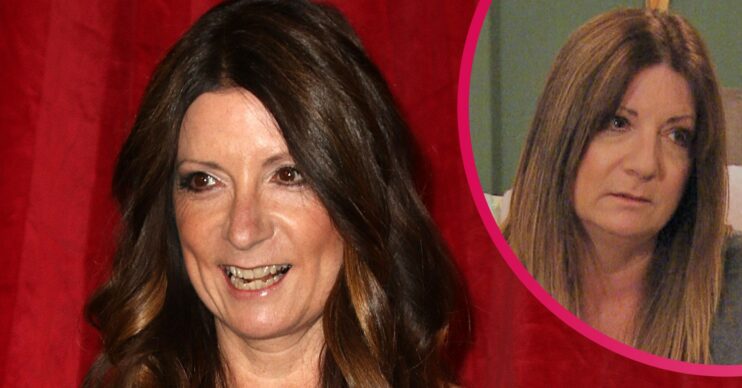 Who is Emmerdale’s Katherine Dow Blyton married to? Is she related to Joanne Froggatt?

The Harriet Finch actress does have a famous relative

Emmerdale star Katherine Dow Blyton might be fighting for her life as Harriet Finch, but in real life things seem much calmer!

The actress lives with her partner and their dog, Dexter and even has a famous relative.

Here’s everything we know about Emmerdale’s Katherine Dow Blyton.

Who is Harriet Finch?

Detective-turned-vicar-turned-police-officer Harriet is the second cousin of Edna Birch.

When she first arrived in Emmerdale, Harriet dated Dom Andrews, but he left the village after his daughter, Gemma, was accidentally killed by Belle Dingle.

Harriet briefly dated vicar Ashley Thomas, but he went back to his ex-wife Laurel following his early onset dementia diagnosis.

Harriet went on to have a relationship with Cain Dingle, before he went back to ex-wife Moira.

Will Taylor was Harriet’s next man, who she had dated before coming to Emmerdale. He was an ex-drug smuggler who Harriet had sent to prison.

Harriet was like a mum to his daughter Dawn and when they reunited they eventually rebuilt their relationship.

In 2020 Harriet had an affair with DI Malone, the corrupt cop forcing Will back into drug smuggling. But when she realised he was a bad guy, she got involved in covering up his murder to protect Dawn who had shot him in self-defence.

Harriet struggled to cope with the guilt of what they’d done and her mental health started to suffer.

Her experience with covering up a murder made Harriet rethink her future as a vicar.

Before Christmas she revealed she had reapplied to join the force again – despite her part in Malone’s death.

She performed her last church service on Christmas Day and by the beginning of January she was already back in uniform!

How old is Katherine Dow Blyton?

Katherine was born on November 20, 1964 in County Durham.

Who is Katherine Dow Blyton married to?

Despite suggestions otherwise, Katherine is not in fact married to former co-star John Middleton!

The Ashley Thomas actor has been happily married to his wife Christine since 1983.

Katherine keeps her private life very private, however when she appeared on Lorraine in 2020 the host did mention Katherine’s boyfriend.

“Social media is nuts because there was a picture of you and you looked absolutely fine and somebody put on the thing that you were pregnant,” Lorraine said.

“Which was a shock to you and to your boyfriend and to everyone!”

Of the incident, Katherine replied: “It would be more than a miracle, to be honest.

“I think it’s this immediate thing people have with Twitter – let’s share it with the world. I’ve just gone through the menopause and the weight gain and you think: ‘well please don’t think I’m pregnant, I’m 55, I’m HRTed to the max, that’s just weight, there’s nothing I can do about that’.”

Although her partner’s identity is not known, Katherine has shared a picture on Twitter of her beloved dog Dexter being washed by ‘his dad’.

Even Dexter, with a little help, is following the guidelines #washyourpaws …or get your dad to do it x pic.twitter.com/JOLBh3Qk6E

Who did Katherine Dow Blyton play in Coronation Street?

Katherine has had four roles in Coronation Street. Her first was in 1996 as Nicola Owens, the ex-girlfriend of Terry Duckworth.

She had a recurring role as Dr Groves in 1998 and 1999, before playing the building manager for Rosamund Street Medical Centre in 2001.

Her final role was as immigration officer Niamh McQuillan in April 2007, who investigated an allegation of illegal workers at Underworld.

Katherine also enjoyed a long stint in Hollyoaks as Sally Hunter from 2004 to 2005.

The Hunter family endured lots of tragedy including the disappearance of her daughter, Ellie, and the death of her son, Dan.

Sally was also the mother of Lisa Hunter – played by Gemma Atkinson – who is returning to the soap for a guest appearance.

As well as being a very familiar face in Soapland, Katherine has had roles in other hit shows including This Is England ’88, The Syndicate, Scott & Bailey and Doctors.

When Katherine starred in The Syndicate on BBC One in 2012, Twitter was abuzz with the suggestion she was related to Downton Abbey actress Joanne Froggatt.

Viewers think the actresses look alike and questioned whether they were mother and daughter.

One user wrote a blog confirming a relative of Katherine had contacted him to say they are not related.

However, the Emmerdale star does, in fact, have a famous relative.

She is a distant cousin of children’s author Enid Blyton!

Katherine revealed her link during an appearance on This Morning in May 2020.

Speaking with Eamonn Holmes and Ruth Langsford, the interview quickly moved on to the topic of family.

Katherine first talked about how many of her family members are nurses and work for the NHS.

Eamonn then changed the subject and asked if she was related to the famous author, Enid. Katherine replied saying: “Apparently yes, very distantly. Enid Blyton was a cousin of my grandpa’s.”

Enid died in 1968 at the age of 71 and wrote many popular children’s series. These included, The Famous Five, The Secret Seven and she created the character Noddy, who is still very popular to this day.