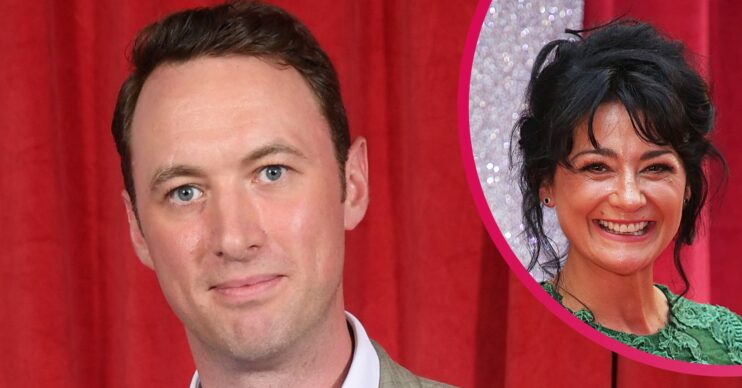 Is Emmerdale star Jonny McPherson still with Natalie J Robb? Is he leaving the soap?

The Dr Liam Cavanagh actor had been romancing his co-star

As Dr Liam Cavanagh in Emmerdale, actor Jonny McPherson has had a colourful love life. And in real life Jonny himself hit headlines when it was revealed he was dating his co-star.

What really happened between him and Natalie J Robb? When did they split up? And where does Jonny live now?

Here’s everything we know about the Liam Cavanagh actor.

Who is Liam Cavanagh?

Dr Liam Cavanagh made his first appearance on screen in January 2014 as the doctor treating Priya Sharma during her pregnancy.

He appeared on and off until 2017 treating villagers including Eric Pollard, Lisa Dingle and Belle Dingle.

Liam became a regular character in 2018 after he divorced his second wife, Maya Stepney, over her affair with David Metcalfe.

He started seeing Bernice Blackstock and the pair became engaged. But on the eve of the wedding she discovered her ex-husband Charlie was in hospital and she had to go to Australia to support her daughter Dee Dee in caring for him.

Liam then got together with Leyla Harding, although his daughter Leanna, wasn’t impressed.

The pair eventually got engaged and despite Bernice returning to try and ruin their wedding day, they got married.

Leyla was a rock for Liam when Leanna was murdered by Meena Jutla, and the couple suffered another tragic loss when Leyla miscarried their baby.

However, Leyla has been hiding her own dark secret…

After a difficult year, including being shot by Meena, Leyla turned to cocaine to forget her troubles.

Despite insisting it was just a recreational thing it quickly became clear she was addicted.

Liam had no idea, assuming his wife actually had a drink problem.

But the doctor finally found out the truth on Thursday (August 4) when he found Leyla unconscious.

She had taken an overdose.

Liam got her to hospital where the team worked to save her life.

When he realised she was an addict, however, he vowed their marriage was over. Will he really abandon her in her hour of need?

Who plays Liam? How old is Emmerdale star Jonny McPherson?

He has just turned 40 years old.

Jonny has had roles in many short films including Night Owls, Rest Stop, Thus and Inhabit.

He also played Steve Smith in the drama ‘Til Death in 2014 and starred in 2017 TV movie Russia 1917: Countdown to Revloution.

In 2021 he had a small cameo in Holby City when the soaps crossed over to combat climate change.

Where does Jonny McPherson live?

Jonny lives on a boat. He spoke about his boat life on Lorraine saying: “[You’ve got] everything you need.

“After living on it for about four years, I now feel that if I go to a normal house: ‘What will you do will all this space? There’s so much!’

“It’s seven foot wide, a traditional English narrow boat. So I can barely stick my arms out!

“It’s got a seven foot cabin height, so I can just about get on my tip-toes.

“You’ve got a living area for watching telly or whatever, then you’ve got a place to eat, a kitchen and a bedroom. And that’s it and that’s all you need.”

Jonny is currently believed to be single after his year-long relationship with co-star Natalie J Robb.

The Moira Dingle actress was revealed to be dating the village doc after they were pictured together during a video call celebration for their co-star, Liam Fox’s 50th birthday.

In the picture Natalie and Jonny could be seen together. As this was during the coronavirus lockdown, it became apparent the two were isolating together.

And she opened up about the romance during an appearance on Loose Women.

She said: “Jonny McPherson and I started to see each other, our first date was in mid-January and then we were just having a couple of dates in February and then obviously in March lockdown happened.

“And we were together at the time Boris Johnson announced it so we were like ‘oh’. He’s kind of been staying with me and then they were saying ‘yes it could be three weeks, yes it might be six weeks’ and I was like ‘oh okay’.”

She revealed their relationship ‘evolved’ from a charity event for children with cancer, where they went to Lapland for the day. The actress said after the event they got to know each other more.

In a cheeky comment about being in lockdown together, Natalie added: “Well we’ve had a few wobbles I’m not going to lie but the making up was fantastic.”

Are Jonny McPherson and Natalie J Robb still together?

A source told The Sun in June 2021 the couple had decided to go their separate ways.

It was suggested they hadn’t been together for several months after quietly calling time on their romance.

He moved back on to his houseboat with his rescue dog Molly, who is a collie-wippet cross.

Although neither Jonny nor Natalie have confirmed the split, Lorraine suggested he was single during his 2021 interview in which he revealed his house boat.

Speaking about Molly, Lorraine commented: “She’s perfect! You don’t need a woman in your life, because you’ve already got one!”

Read more: Leo returns to Emmerdale, but how old is actor Harvey Rogerson?

Liam is currently a major part of Emmerdale storylines.

There are no plans for him to leave.

However, whether his marriage to Leyla can survive, remains to be seen…